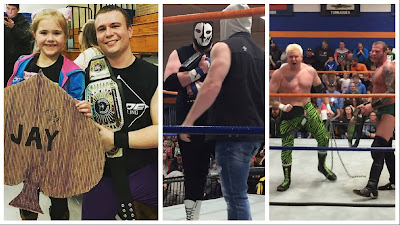 Since tonight is the big Anniversary 2 show for Stride Pro Wrestling, I've been doing a lot of reflecting on the company, competitors and the course we've taken over the past two years. So here are the 10 ten things I've learned about Stride since our first show in March 2016.

8.  When Tony Flood moved to Canada he went from bacon being his favorite pizza topping to Canadian bacon.

7.  Roger Matheus was kicked out of the MMA because he can't spell M-M-A.
6.  Dexter Roswell is not registered to vote.

5.   Heath Hatton is in a 12 step program for his addiction to baby oil.

4.  This is Anonymous' autograph.
3.  Lane Austin can count to three and is truly the hardest working referee in the game. We love you, man.

1.  Stride Pro Wrestling fans rule. We thank you for your support.

Obviously, I had a little fun with this list. I do want to say I am truly grateful to everyone who is part of Stride Pro Wrestling. We have come a long way in two years and I'm proud to be a part of it and I look forward to what the future holds. Learn more about Stride tonight at 6:30 p.m. at Cambria Village Hall (302 S. Richart St. in Cambria, IL)

Posted by Kevin Hunsperger at 11:27 AM