"Macho Man" Randy Savage & Elizabeth, Goldust & Marlena, Eddie Gilbert & Missy Hyatt. They're among my favorite couples in pro wrestling. They all seemed to match together perfectly. But this is pro wrestling of course and not all matches are ones made in heaven. Since it's Valentine's Day, I thought I'd look at three of my favorite odd couples in the biz.

1. Mark Henry & Mae Young. This pairing was created during the Attitude Era. Mark Henry was an admitted sexaholic. And Mae Young was a sassy old timer who needed some lovin' too. The romance budded and Mae ended up pregnant and giving birth to a hand. Yes, a hand. I don't know why, but that hand showed up at Raw 1,000 years later all grown up.

2. James Ellsworth & Carmella. There was something about this duo I really enjoyed. Ellsworth was an unexpected signee with the company after being destroyed by Braun Strowman. After spending some time with Dean Ambrose I knew Ellsworth was on borrowed time. He added to his 15 minutes of fame by joining forces with Carmella. I loved the way she treated their relationship. But let's not get too caught up in the Money in the Bank incident. Some still argue Ellsworth is the true winner of that match, I, however, am not in that camp. The relationship was fun while it lasted. 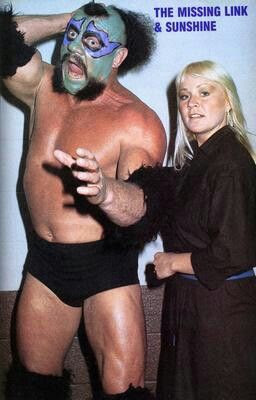 3. The Missing Link and Sunshine. Get in your way back machine for this one. The Missing Link had worked as a heel in World Class Championship Wrestling and WWF before coming back to Texas. Sunshine found herself in a tough spot and Link made the save. I don't recall him ever talking and I don't believe they were ever an actual couple, but I did enjoy the pairing of a 'Beauty and the Beast' scenario. The idea carried over into MidSouth or UWF when Link joined up with Dark Journey. If only George "The Animal" Steele could have wooed Miss Elizabeth.

These are just a few of my favorite odd couples in wrestling. Who are your favorites?

Posted by Kevin Hunsperger at 8:43 AM