Who will induct Goldberg? 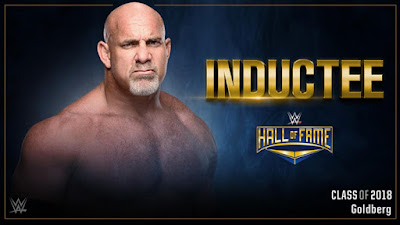 I typically do not report rumors on My 1-2-3 Cents. In fact, I don't do much 'reporting' at all. But I do share links from time to time on the Facebook page. This blog was set up seven years ago to be a platform for me to share my thoughts on the world of pro wrestling. Instead of my 2 cents, it's my 1-2-3 cents. Get it?

Anyway, I've seen several sites resharing the rumor that Paul Heyman is going to be the man to induct Goldberg into the WWE Hall of Fame. I guess I can see the connection in that Goldberg's two (short) WWE runs featured feuds with the biggest 'Paul Heyman guy' on the planet, Brock Lesnar. But honestly, I figured Paul would be the man to induct The Dudley Boyz into the Hall of Fame.

So who would be a suitable Goldberg inductor? My first thought was Eric Bischoff. He seemingly makes the most sense, being the man who helped create the Legend we know today. Other candidates would be Hulk Hogan (I know), The Rock (he 'brought' Goldberg to WWE) or Triple H.

Don't get me wrong though, Heyman is a great speaker and will do the duty justice, assuming the rumor mill is right on this. After all, they got the Double J going into the Hall of Fame right...

Posted by Kevin Hunsperger at 4:49 PM