I suspect there are some non-wrestling fans reading this blog, so let me explain real quick what a heel is. In the wrestling world, the heel is the bad guy. And while I'm probably not really all that bad of a guy, my actions on Father's Day 2017 has me second guessing myself.

As you're reading this chances are I'm either on my way to or already in St. Louis for the WWE's Money in the Bank event. It's a live wrestling show at the Scottrade Center. I'm going (or there) with a group of wrestlers from Stride Pro Wrestling, my buddy from work Weston and of course Chad. When I heard about the event, I didn't even think about it being Father's Day. I looked at my calendar on my phone and there were no events entered in it, so I bought my ticket. 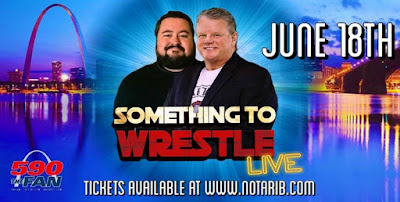 That all went down in late February or early March. Then days later it was announced my favorite podcast, Something to Wrestle with, Bruce Prichard was going to do a live show prior to the WWE event. Since I had to sell my tickets for the Orlando show because we changed our minds about going to WrestleMania, I quickly snatched up a VIP ticket. Then all the pieces fell into place and I discovered it was Father's Day.

No one in my family has given me grief over this. My wife and daughter are going to go shopping. I did spend the morning hours at home, getting in an early morning run to keep my run streak alive. It's other people I've told about my plans that have given me a weird look. Some have said, "It's your day, spend it how you want." While others have said, "You're not going to be with your kids on Father's Day?"

I'm guessing as more people learn of my plans they'll fall into either side of my internal debate. The closer it comes to me leaving, the worse I feel about my decision. But plans are made, tickets have been purchased. It's time to hit the road. A family trip is days away and we'll get to bond over a seven-hour car ride then.

Posted by Kevin Hunsperger at 9:32 AM

Email ThisBlogThis!Share to TwitterShare to FacebookShare to Pinterest
Labels: Bruce Prichard, Father's Day, Kevin Hunsperger, Money in the Bank, My 1-2-3 Cents, Something to Wrestle With, STRIDE Pro Wrestling, WWE