Money in the Bank predictions

I'm looking forward to this year's Money in the Bank event for a few reasons. Number one, I'll be there. I'm joining some friends from the Stride Pro Wrestling roster along with my buddy Weston (who will be on the podcast with me reviewing the show, it'll drop later than usual on Monday). Chad will be there too, but he's got primo seats near the ring. Before the show starts I'm going to the live Something to Wrestle with Bruce Prichard show too. It's going to be a great day.

Here are some quick thoughts on the show.

The Hype Bros will beat the Colons. But something tells me one of the Hype Bros will turn on the other. I can't imagine fans booing Zack Ryder, especially since he's returning. I just don't want him to become the Jannetty of the team.

Naomi will retain the SmackDown Women's Championship against Lana.

The New Day will become SmackDown Tag Team Champions after beating the Usos.

Carmella will win the Women's Money in the Bank Ladder Match. I never thought I'd say that, but the others involved in this don't need the prop of the briefcase. I can see Carmella and James Ellsworth working the case into their current gimmick.

Jinder Mahal will retain the WWE Championship against Randy Orton. "Losing in your hometown" trumps the "never bet against Orton" mantra that I have. 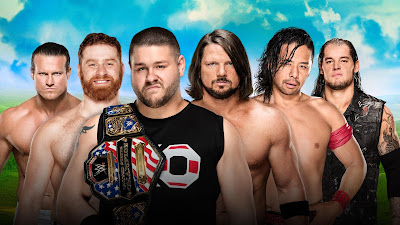 I'm still divided on who will win the men's Money in the Bank match. I've said it before, as long as it's anyone but Baron Corbin, I'll be content. But since I need to name someone, I'm going with Kevin Owens. Like Carmella, I can see him milking the gimmick of Mr. Money in the Bank the best. However, if Orton wins the belt back, I could see Corbin winning the case and cashing in that night, but who knows what order they're going to go with the show.

Posted by Kevin Hunsperger at 1:36 PM