REJECTED: The podcast guests that could have been

For nearly two years I've been doing a wrestling podcast on iTunes and the Jittery Monkey Podcasting Network. It's given me an opportunity to interview a variety of wrestling legends, current Superstars and indy talents around the world. 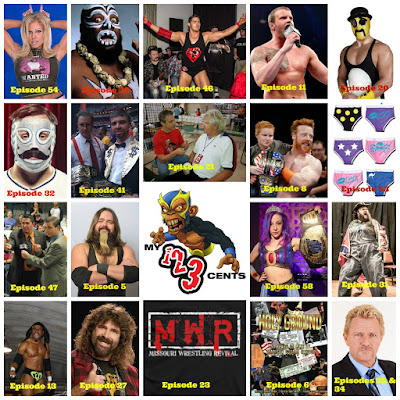 Here are just a few of the greats I've had the chance to interview: WWE Hall of Famers like Mick Foley, Bushwhacker Luke, "Hacksaw" Jim Duggan and "Cowboy" Bob Orton. The legends including Honky Tonk Man, Jeff Jarrett, Kamala, Terri Runnels and "Beautiful" Bobby Eaton. Current Superstars like Sheamus, Kofi Kingston and Xavier Woods have all be on too. Indy favorites Heath Hatton, Farmer Billy Hills and "Golden Boy" Greg Anthony are friends of the show as well. It's an impressive lineup if I do say so myself.

But for all the luck I've had securing guests (and I can thank a variety of friends in the business for hooking me up), there have been plenty of rejections. I typically email or tweet potential guests and ask if they're up for doing a show. Here's a few that either declined or never responded. I hold out hope that these men and women will one day be a part of
My 1-2-3 Cents The Podcast.

Roddy Piper (prior to his death obviously) - No response
Victoria - Not doing interviews at this time.
Elvira (she was a WrestleMania celebrity I wanted for the Halloween show) - Booked through the rest of the year.
Mr. Pectacular - When busy schedule slows down.
Eric Bischoff - No response
Dutch Mantell (aka Zeb Colter) - No response
Vader - No response
Bruce Prichard - No response
Ric Flair - I aimed really high with this one. Holding out hope he'll join me one day. Woo!

Posted by Kevin Hunsperger at 3:56 PM