It's hard to believe 15 years have passed since the September 11 terrorist attacks. I was a young father working in West Lafayette, Indiana at the time. Tuesdays and Wednesdays were my days off and I was still sleeping when the first plane hit the World Trade Center. I had to go to a meeting at work that day, so I had turned on The Early Show on CBS moments after the second plane had hit. Smoke was pouring from the building and the anchors calmly tried to explain what was happening. Then the Pentagon was hit and after that word of a crash in Pennsylvania.

My mind was racing and I knew in my heart this couldn't have been an accident. I never would have imagined that people could hijack a plane and use it as a weapon though. I continued getting ready for my meeting and listened to the simulcast on the radio as I drove to the station. On the way the announcer said with a great deal of fear in voice, the tower is crumbling. My heart sank as I pulled into the station's parking lot and continued listening, not wanting to believe what was happening.

Inside the station everyone was glued to the TV. The meeting we were to have was canceled. Crews slowly started heading out looking for ways to localize the events that would change the world forever. I drove back home, told we had enough crews for our local coverage. It turns out the network had taken over and we did a commercial free late broadcast that night.

I sat mesmerized most of the day watching the coverage on a variety of channels. At one point I had to turn off the TV and focus on my two young children. Our youngest at the time had just been born two months prior. After all the fear and not knowing, I was proud to see how our country and our leaders rallied. When President Bush talked from Ground Zero on the bullhorn, there was a sense of patriotism that will be hard to match.

That spirit trickled down around the country. Our little community in Greater Lafayette held ceremonies and vigils in the years that followed. There's a permanent monument still there as well. On the one year anniversary my boys were among hundreds of others who laid a carnation on one of the pieces of steel from World Trade Center. 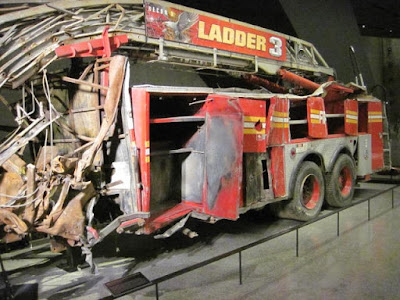 More recently, my wife and I visited the National September 11 Memorial and Museum. Words cannot adequately explain what we experienced during our visit. If you're ever in New York City, this is a mandatory stop on your tour of the area.

Remember the lives lost that day and those who died in the direct aftermath of the attacks. We will never forget.
Posted by Kevin Hunsperger at 1:10 PM