Imitation is NOT the sincerest form of flattery

The latest Disney film hasn't even hit theaters yet and its merchandising wings have already been clipped. If you haven't heard by now, the company has pulled Halloween costumes, pajamas and shirts that feature the character Maui in the film Moana (due out in November). The full Associated Press article can be found here. When I first saw the article I thought it was something put out by the satrical site The Onion, but it's legit. 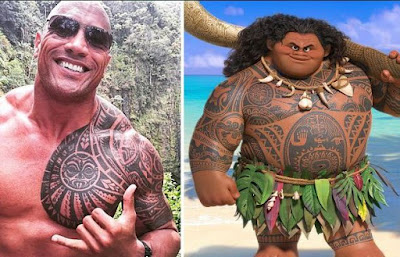 Quick history lesson: Maui is a revered figure in Polynesian history. Some Pacific Islanders view him as an ancestor. In the film, he's voiced by Dwayne "The Rock" Johnson. Wrestling fans know of The Rock's Samoan and African American heritage. So far Johnson hasn't said anything about this issue. 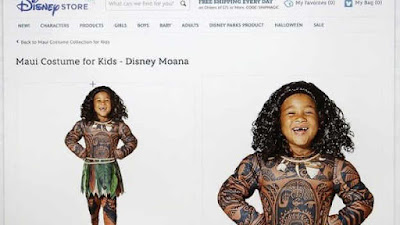 Some people are offended by the costume and the appearance of the character in the movie. One woman, Chelsie Haunani Fairchild said it's offputting to have a child wear the skin of another race.
"Polyface is Disney's new version of blackface. Let's call it like it is, people," Fairchild said in a video she posted on Facebook.
Disney was quick to respond. As I mentioned, not only did they pull the costumes and clothing, they added this statement.
"The team behind Moana has taken great care to respect the cultures of the Pacific Islands that inspired the film, and we regret that the Maui costume has offended some. We sincerely apologize and are pulling the costume from our website and stores."
Fairchild says she accepts the apology, but is still offended and it doesn't change what Disney did. I'm obviously not Polynesian so what I have to say really doesn't matter. But I don't see how this costume is making fun of anyone. Some say the tattoos on the arms, legs and torso have a very significant meaning in the culture and that's what crossed the line. I respect that, maybe Disney should have used generic tattoos to illustrate that. But Fairchild clearly thinks it's because the skin color of Maui shouldn't be worn by people who don't match his. 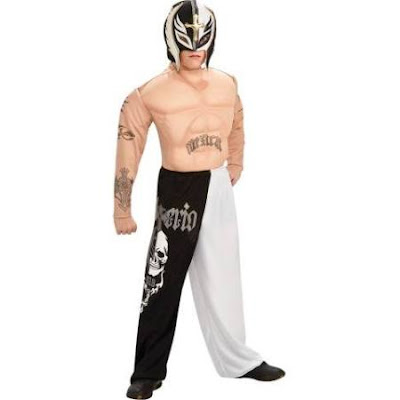 WWE once sold a similar costume of its popular Superstar Rey Mysterio. Even if you're not a wrestling fan you can probably gather that Rey is Latino. I don't recall hearing any outrage over that costume from the Latino community, and it's still being sold online today.

Disney has done a great job diversifying the ethnicity of its characters over the last couple of decades. We've seen a Middle Eastern princess, an African American princess, a Native American princess, an Asian princess, etc. All of these princesses were marketed to children and Halloween costumes and other accessories followed.
Is it because Disney didn't include skin tone in those dresses? Would it have been better if the Maui costume was just a leaf skirt and shark tooth necklace? Or what if Disney was donating a portion of the profits from the costumes to cause that supports the Polynesian culture? The cynic in me suspects there would be less offended people if they were profiting off the film and its merchandise too.
Long story short, if you're offended by the costume, don't buy it. Don't go see the film. You have every right to be upset. I respectfully disagree with your point. Today's society spends more time looking for reasons to be offended than finding things to be grateful for.
Posted by Kevin Hunsperger at 4:26 PM