No Chants in Hell

Ok, I’ll admit, that was some lame word play for the title. I couldn’t think of anything else I’ve written before about my dislike of fans chanting, “WHAT!” during wrestling shows. Over the weekend, I was present at two live events, PWS Superstars and PWG Kurt WrestleReunion 3. After the PWG show, I went and watched WWE’s Royal Rumble with some friends. One thing I realized after watching the three shows is there are several chants wrestling fans partake in that I would be quite content if I never heard again. A little disclaimer; something I noticed about myself during the shows is I tend to watch wrestling shows the same way a critic watches a film or listens to music, I stop being a fan and focus on the little details. I also tend to over analyze things. As if long time readers of the blog haven’t noticed. So take what I’m going to say with a grain of salt and realize after ten hours of wrestling, I was starting to get a little punchy.

The dueling chant is fine when you have two highly popular wrestlers, but lately it seems fans chant for every wrestler. Very few wrestlers on an independent level, unless they get silence from the crowd, get a negative reaction from the crowd. Therefore it’s not uncommon for every match on a show to get a “Lets go Jimmy! Lets go Chris!” chant. I understand fans want to cheer and if they’re not real familiar with the guys in the ring, or if the guys don’t have catchphrases to chant, a spirited dueling chant is a good stock chant to use. Unfortunately the dueling chants come out multiple times during a match. So after a four-hour show, hearing the same chant 20-30 times, it gets a little old. Fans need to remember it’s okay to boo wrestlers.

If there are any Juggalos reading this, this one’s for you. I’ve got nothing against the “Woot. Woot,” and have been known to say it myself on occasion. Again though, when you say it every thirty seconds during a four hour show and don’t say anything else, it gets really annoying. Either think of something else to say or just take a break from saying anything for a few minutes. I have to give props to the Juggalos I was subjected to over the weekend. During the PWG show for some reason, the Juggalos started chanting, “who’s going chicken hunting? We’re going chicken hunting.” Those are lyrics to an Insane Clown Posse that I actually have on my Ipod. I don’t know why they chanted it, but it amused me. Then they went back to “Woot woot” and I got annoyed.

Okay, going back to what I said earlier about not watching wrestling as a fan and more as a critic, I don’t want to say I watch more wrestling than the average fan, but I do tend to watch quite a bit of wrestling besides just WWE. Because of this I am somewhat accustomed to seeing the same match structure over and over. I think this is why I don’t consider Undertaker vs. Shawn Michaels from Wrestlemania 26 or Undertaker vs. Triple H. from Wrestlemania 27 are THAT good and are actually overrated. During the PWS and PWG shows any match that consisted of guys doing lots of moves and counter moves mixed in with several “finishing” moves that should have but didn’t end the match got a “this is awesome” chant. While the matches were good and the wrestlers didn’t blow any moves, the matches themselves were all laid out the same. I’ve tried to think of a good analogy and really couldn’t. The best I could do is, chanting “this is awesome” at every match that had good back and forth action would be like saying Star Wars and Howard the Duck are both awesome movies because they follow the same structure of story telling and hit every beat correctly.

Perhaps it’s a minor nitpick, but when everything is “awesome” then nothing is really “awesome.” Maybe instead of chanting, “this is awesome,” fans should chant, “this is standard above average display of wrestling skill.” That’s just a suggestion for vocal displays at future shows. 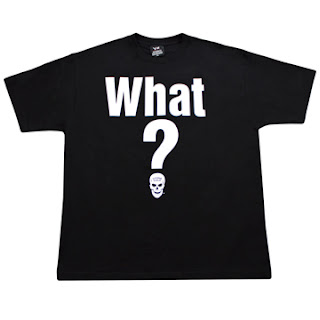 This goes without saying but “What” is the most annoying chant to ever be chanted. It’s popularity made me take Steve Austin out of my top 10-wrestler list due to making it popular. If you’re near me at a show and chant this, you become the target of my continued hope I can someday make people’s head explode like the movie Scanners.

Do you have a chant you think should be put to rest? Or do you want to tell me to “lighten up Francis” and just enjoy wrestling the way it’s meant to be enjoyed? Whatever your opinion, let us know on the My123Cents Facebook page. And if you haven’t “liked” the page yet, do so. We just gave away a couple of prize packs and will be holding more contests in the future.
Posted by Kevin Hunsperger at 12:56 PM

Email ThisBlogThis!Share to TwitterShare to FacebookShare to Pinterest
Labels: Chants, What?, Wrestling, WWE