I was going to wait until we got closer to the January 28, Season 11 Chikara kickoff show The Thirteenth Hat before I wrote about Chikara again. But after watching the latest event center for the show (click here to watch it), I was once again reminded of why I feel Chikara is the best promotion out there.
I remember back in the ‘80s whenever a WWF Pay Per View would be coming up, “Mean” Gene would be in the control center to provide updates on new matches or continue the hype for matches already announced.  These little segments would run during WWF Superstars and Prime Time Wrestling. They made the PPV seem special. Not like today’s WWE where two guys will have a match and then in the next segment Michael Cole will leisurely comment there will be a rematch at the next PPV in six days. I know there’s a difference between Chikara and WWE in the number of shows they produce and therefore Chikara actually take time to promote their shows better. 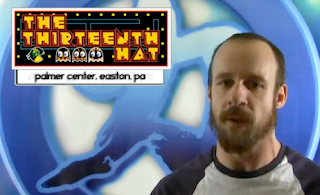 Back to the Event Center videos, watching Bryce Remsburg announce Gran Akuma had accepted Icarus’ challenge and seeing Akuma respond took me back in time. It made me a kid again and reminded me why I became a wrestling fan. It’s the little things like the Event Center videos and the wrestler blogs on the Chikara website that separate Chikara from the other independent promotions out there.
Right now there are only two matches announced for the kickoff show. Even with only two matches known, I am super excited for the show. I’m also excited about possibly seeing my first live Chikara show in 7 years when Chikara returns to Chicago on April 28. If you’re in the area (and by that I mean, anywhere on Earth) you should come to the show. I’m going to try and drag Kevin along so we could possibly have a My123Cents meet up before the show.
Now that it has started, in case you aren’t prepared, be warned there will most likely be several Chikara blogs in the coming months. Oh, and if you need more proof of why Chikara is awesome, go look at the events page on their website and check out all the logos for upcoming shows.
I make no apologies for being a mark. It’s when I no longer feel like a mark that my interest in wrestling starts to wane. Like us on Facebook and follow us on Twitter. Getting closer to big giveaways.
Posted by Kevin Hunsperger at 2:15 PM