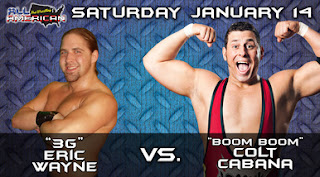 Regular readers know that I work for an independent wrestling company in southern Illinois called All American Pro Wrestling.  AAPW has been around more than five years, and in September 2011 debuted its first TV show, "Collision".  I'm a commentator on the show and have enjoyed every minute of it.  Now, AAPW is looking ahead to January 14th and its biggest night ever: AAPW Main Event.

The show will feature local talent as well international stars El Generico taking on PAC.  I'll rundown all the matches in the coming days, and since I do work for AAPW, I'm not going to pick winners or make predictions, I just want to let the fans know more about AAPW and maybe some of you will make the trip to Marion, Illinois or buy the DVD of Main Event when it becomes available.

Today's focus is on Colt Cabana and "3G" Eric Wayne.  No, he's not a computer savvy guy, he's a third generation superstar, the son of Ken Wayne and grandson of Buddy Wayne.  To learn even more about Eric Wayne, head to his bio on the AAPW page.  Like I said earlier, I'm not going to pick winners or put one guy over another in these postings, but I will say this.  Eric Wayne is a hard worker.  He's got a lot of talent and I know he's looking forward to this opportunity to face Colt Cabana.  Wayne was supposed to face ROH Champion Davey Richards back in August, but because of a conflict with Sinclair Broadcasting the plug was pulled on the match.  I know Eric was disappointed in that decision and I think that's why he pushed so hard to face Colt.

Both men have been around the block so to speak, so I'm looking forward to calling the action on this match.  They're each dedicated to wrestling and will do whatever it takes to make it to a show.  I can't imagine the hectic lives they lead making it from one town to the next ready to perform.  And perform may be too simplistic of a word.  These guys (all of them) are busting their butts night after night for very little pay.  It's the life of an indy wrestler.

I respect both these guys abilities and talents inside the ring.  Fans shouldn't underestimate Eric Wayne just because he's not been to the WWE or hung with CM Punk.  3G has wrestling in his blood and this matchup will be a great one to see in person.  So I invite you to join us for Main Event coming up on January 14.  Click here for all the details.
Posted by Kevin Hunsperger at 1:12 PM