The Man That Gravity Forgot

In addition to making my wrestling debut on January 14, 2012, I also got to witness (and call) an exciting match between two guys who certainly deserve a shot in "the big leagues" of wrestling.  El Generico, "the generic luchador" took on "The Man That Gravity Forgot" PAC.  I can't say enough good things about both these men, not just inside the ring, but outside as well.  They put on one helluva show for the 405 fans who were in attendance that night.  The rest of you will soon be able to own this gem on AAPW Main Event DVD.

For those of you who aren't familiar with PAC, I would suggest learning more about him.  It's hard to even put into words some of the aerial assaults the man can pull off.  Again, I'm not taking anything away from El Generico or anyone else on the AAPW roster, but this guy should definitely we working in the WWE.  But honestly, I'm glad he's not, otherwise the fans of AAPW would have never been exposed to him on this level.  And let's face it, when the WWE gets there hands on an indy sensation, they tend to neuter them and make them adapt to their style of wrestling (or sports entertainment).  But it's their company and they can do that.

Honestly, I was extremely nervous doing the commentary for this match.  I only hope I don't end up sounding like a total buffoon in it.  There were moments where all three of us on commentary were in silence.  We were soaking up the action in the ring and wanting more.  It was an amazing display of athleticism.  And the fans in attendance ate it up as well.  I think just about everyone in the building that night was impressed and had a new found respect for these two. 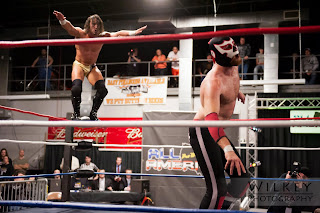 PAC was extremely polite and humble before and after his match.  One of the things that stuck out to me was the fact that he was warming up in the ring prior to the show and invited one of the AAPW stars in with him.  I watched from a distance, but could tell the wrestler he was in there with was taking the words PAC spoke to heart.  It's something I would have never imagined seeing.  Prior to the show starting, when PAC heard the show was a sell out, he congratulated us and gave the chair that he'd been sitting on in the locker room. He said someone out there needs it more than I do.  Then after his match, PAC asked us how the match looked, to which we all replied incredible.

I think all four of our guests (Matt Cross, El Generico, Colt Cabana, and PAC) had a great time.  I know all of us at AAPW enjoyed their presence.  They all took the time to pose for pictures with the fans and sign autographs.  I'm excited I got to be a part of the buzz that night.  And I really hope at some point down the road our paths will cross again because like I said, not only is PAC a pro in the ring, he's one outside of it too.