End of an Era: The Closing of the ECW Arena

Saturday, January 14 will most likely see the last wrestling events held at the famed ECW Arena in Philadelphia, PA. Combat Zone Wrestling (CZW) will hold an afternoon show while EVOLVE will hold an Internet Pay Per View in the evening. The owner of the Arena plans to renovate the building and focus more on other live events other than wrestling in the future. If this weekend turns out to be the last weekend for wrestling, it will be a sad date for fans of independent wrestling and the proverbial final nail in the ECW legacy coffin.
The Arena garnered notoriety during the ‘90s as the home to ECW. The “bingo hall” on the south side of Philly became as synonymous with wrestling as the Sportatorium in Dallas, the Omni in Atlanta and Madison Square Garden in New York. Fans would pack the arena on a monthly basis to see an independent promotion that would play a major role in redefining pro
wrestling during the later part of the 20th century.
Due to ECW’s popularity, not only was the venue legendary, so were some of the fans that populated the shows every month. You can go up to any ECW fan and say, Hat Guy or Rob Zombie Fan and they were instantly know who you are talking about. It was during ECW’s existence where fans who were at every show started to gain the perception they were a part of the company. This, at times unfortunate, trait has spilled over to fans in TNA’s Impact Zone and a few other independent promotions.
After ECW closed up shop in early 2001, the ECW Arena became THE place for all the other promotions that desperately wanted to be the new ECW to run shows. If memory serves me correctly, during 2001 and 2002, there were so many different promotions running shows at the Arena they were over saturating the market and no company was having near the success ECW had with the venue. It probably didn’t help that most of the companies were trying to be ECW instead of being something new.
Over the past six years most of the top Independent companies ran the Arena on a regular basis. Ring of Honor used it for TV tapings. Dragon’s Gate did a few PPV tapings in the Arena.  CZW ran the most shows in the Arena over the past decade. Chikara used it as the location for the Chikara Wrestle Factory training school as well as a regular venue for shows during the year, including their annual three-night tournament King of Trios.
The King of Trios is probably the biggest reason why I am disappointed to see the Arena closing. KOT is usually held in March or April and this year it would have fit perfectly into my time off in between jobs so I had already mentally made plans to attend the biggest weekend in Indy wrestling. There has been no word about KOT this year, but with Chikara announcing a show in Rahway, New Jersey for April 14 and a Midwest weekend in Chicago and Lafayette, Indiana the weekend of April 28-29, fan speculation is Chikara didn’t have a suitable venue to hold the tournament and is therefore either not doing King of Trios this year or it will be later in the year.
As for the shows running on Saturday, CZW has a main event title match of Devon Moore defending against Adam Cole. Plus former CZW owner John Zandig will face current CZW owner DJ Hyde. Those two are actual wrestlers so it won’t be like Vince McMahon vs. Eric Bischoff. I don’t really know much about CZW so I can’t comment on the quality of their shows. 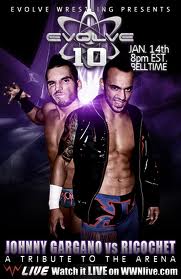 In the evening, EVOLVE has a main event title match of Johnny Gargano vs. Ricochet. While there are more wrestlers on the EVOLVE show that I’ve heard of, again, I haven’t seen anything from the promotion so I don’t know what to expect and can’t comment as to the quality of the shows other than the wrestlers themselves are extremely talented so I’d expect a good show. In addition to their normal roster, the former voice of ECW, Joey Styles and the Original Gangsta, New Jack have been announced as appearing on the show as well as other tributes to the legacy of the Arena. Fans wanting to check out EVOLVE or just wanting to be a part of history by watching the last show from the Arena can order the Ippv at by clicking here.
What will be interesting to watch over the course of 2012 is waiting to see if another venue in Philadelphia, or another city becomes the new hotbed of Independent wrestling. Of course the totally biased thing to say now is that new venue could be the AAPW Arena in Marion, Illinois. While I wish the best for AAPW, I will take a wait and see approach to see where the next big thing in wrestling rises.
Have any memories of the ECW Arena? Share them on the My123Cents Facebook page.
Posted by Kevin Hunsperger at 4:18 PM