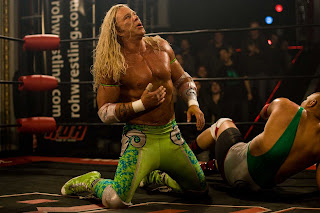 If you haven't seen "The Wrestler" yet and plan to watch it, stop reading now.  This post will surely ruin the end for you.

Okay, if you're still reading, thanks.  The movie played this afternoon on FX.  I didn't know it was on today and caught the last hour or so of it.  I originally saw it in the movie theater back in 2009.

Like most fans, I found it to be a great film.  Even my wife, who hates wrestling by the way, enjoyed it.  I'm not going to go into details of the movie, if you've seen it, you know what it's all about.

I'm writing this more for a discussion piece.  Do you think the Ram dies at the end?  He's struggling in the ring after having heart surgery.  Climbs the top rope and soars in the air.  Then it fades to black and the credits roll.  Does he become another sad statistic of the business?  Or does he triumph with a win over the younger star and relaunch his career.

My guess is that the Ram dies in the end.  I'm basing this mostly on the fact that there's never been a sequel to the film.  I know that's a ridiculous form of logic, but it works for me.  Plus, I think the whole point of the film is to show us fans what these guys go through in their lives.  It's not always a happy ending.  These guys (and gals) sacrifice their bodies, their families, and their morals in some cases for the entertainment of us.  In the end, that takes a major toll on their bodies.  Some die in the process.  We mourn, we chant their names for a while after they're gone, but then we move on.  After all, life goes on right?  As I write this I'm realizing perhaps instead of being critical of some performers, I should be more appreciative of what they do.  But most of my criticism with the business is directed toward the creative staff, writers, and promoters, not the men and women giving their all in the ring.