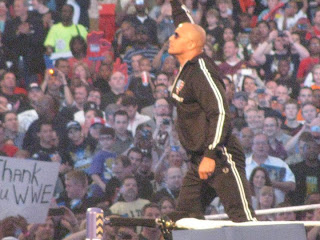 Let me start off by saying I love the Rock. I really do. He's one of my all time favorites.  I'm going to assume the party only happened because Raw was in Miami.  While parts of it were entertaining, and I know in WWE the focus is on entertainment these days.

I can appreciate the fact that they did the whole montage at the start of the show with the 9/11 stuff, but just making an observation.  This whole thing was done because Osama Bin Laden is dead, right?  Not once during the package did we see or hear anything about that.  It was a flashback to 2001.  I'm sure this was just an oversight and not politically motivated, right Vince?  ;)

I'm about an hour into the show and there has been not actual match.  Well, that's not totally fair, I guess Kelly Kelly and Maryse wrestled about 30 seconds before Kharma made her way to the ring.  I've gotta say, I'm curious where they're going with this character.  I assumed she'd be a heel, but that doesn't appear to be the case.

Finally an hour into the show, and we're getting what looks to be a real match.  The WWE title match.  I like the fact that Jim Ross is back on the headset.  I think he, Josh, and the King could make a great team on Raw.

I will say the crowd is hot during this match.  I don't know how, but I avoided all spoilers today, so I have no idea how this match is going to end.  Hoping for a Miz victory, but I'm not holding my breath.  I'm sensing an Alex Riley turn, which would suck.   Ref bump.  Geez, that was the slowest count on the planet... What, they're reversing the decision?!?  Give me a break.  That's bull.  I kinda wish now they would have drafted Miz to SmackDown! so he could feud with Christian.  I'm sorry members of the CeNation, but Cena doesn't need the title to be over.

Speaking of Cena, why didn't he just say we killed Osama Bin Laden at Extreme Rules?  Is "killed" not PG?  The Rock just called Michael Cole a b!tch.  Just sayin'...

We have a new Intercontinental champ, let's put him in a tag team match.  Huh?

I still think Dolph Ziggler should have kept his hair long and blond.  It helped with his character.  He just looks like Evan Bourne's big brother now. Mae Young cracks me up.  I always wonder how "there" she really is.  Will Cena hold the title to Wrestlemania 28?  I certainly hope not.  Neither he nor the Rock need the title.  The match is big enough without the belt.

Oh, now this continues to make sense.  One half of the tag team champions is wrestling in a singles match now.  I get it.  (Not really)  I think the WWE needs to do something with Mason Ryan so he doesn't look like Baby Batista.  Not sure how to fix that though.  And why was Kane wrestling in a singles match on Raw?  He's on SmackDown!  I thought only as the champion he could wrestle on Raw.  And didn't we just see the Corre feud with these guys last month?  It's pretty much the same thing at this point, isn't it?

More Rock.  Is he a lock for the Hall of Fame in 2012?  Why all the love?  Again, I love the Rock, but this entire show has revolved around him with very little wrestling.  I definitely think there was way too much entertainment on this show.  And I'm unhip and didn't recognize half the entertainers...   But I read the ratings did well, so I guess we can expect more of this in the future.  Just wait til he turns 40 next year...
Posted by Kevin Hunsperger at 6:15 PM