A Match Made in Heaven

When it comes to wrestling couples, I think you'd be hard pressed to find a better one than "Macho Man" Randy Savage and Miss Elizabeth.  The two were married in real life when Savage introduced her as his new manager.

It was the summer of 1985.  I remember watching Wrestling Challenge and Superstars and all the managers were vying for Savage's contract.  Mr. Fuji, Jimmy Hart, Freddie Blassie, Bobby Heenan, and Johnny V all wanted to represent the Macho Man.  Then in what could be described as a surprising turn of events, Savage introduced an unknown woman as his new manager.  Here's a clip of it from YouTube, courtesy of the WWE.

Back then, having a female involved in a managerial role was pretty rare in the WWF.  World Class had been doing it, as had the NWA.  With the exception of Cyndi Lauper's brief stint with the company, Liz was the first female manager in the WWF(E).  Someone please correct me if I'm forgetting someone else.

The two remained married even after their TV relationship dissolved.  Savage picked up Sensational Sherri as a manager.  The two were the royal couple of the WWF.  They were together on air for about two years before Savage turned face again and was saved by Liz at Wrestlemania 7.  Sherri had been kicking Savage while he was down after losing a retirement match to the Ultimate Warrior.

Savage and Sherri worked well together, but obviously didn't have the chemistry he and Liz did.  Sherri though was able to get aggressive since she was a wrestler.  She'd take bumps for Randy, something Liz couldn't do.  She was tough.  The two even teamed up to face Dusty Rhodes and Sapphire at Wrestlemania 6.  The match was mediocre at best.  Rhodes and Savage would have had a better match on their own I think.

But as I mentioned, Savage and Liz reconciled after Wrestlemania 7 and the two had a TV wedding.  I've written briefly about that before.  Click here if you want to know more about that.

Ironically enough, the two ended up divorcing briefly after their SummerSlam wedding.  However, if my memory serves me correctly, they remained an onscreen couple, at least briefly.  The two would reunite in WCW years later.  Liz and Lex Luger would eventually hook up on screen and behind the scenes.  Sadly, she died in 2002 or 03 of an apparent drug overdose. 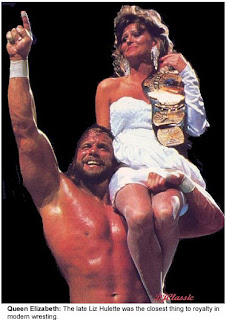 Besides the initial introduction of Elizabeth and their reconciliation and wedding, one of the defining moments this couple's time together was Savage's title win at Wrestlemania 4.  The two together in the middle of the ring with Liz on Savage's shoulder with the title on her own shoulder.  I would venture to say it was the highlight of both of their careers.  As a 15 year old mark, I was quick to jump on the Macho Man's band wagon.  I liked him before as a heel, but his value increased in my young eyes when he aligned himself with Hulk Hogan.

Another fond memory of this couple would be the buildup to the Savage-Ric Flair Wrestlemania 8 title match.  "Before she was your's, she was mine, wooooo!"  I loved the angle.  Of course I was fully behind Flair back then, loving the heel character more than the kinder, gentler Randy Savage.

But of course, good triumphs over bad, and the first couple of the WWF had reason to celebrate again.

No matter what new couples the WWE throws our way, I don't know that they'll ever be able to top the Macho Man and Liz.  The two have reunited again in that big ring in the sky.  Godspeed to both of them.
Posted by Kevin Hunsperger at 4:48 PM