I feel like lately Chad and I have done a lot of complaining about the WWE and TNA.  I've noticed readership is down a bit too. I'm wondering if there's a correlation.  Maybe there is, maybe readers finally figured out we suck.  (that's a joke)  So I'm going to focus on something positive today.

Some of you may already know from previous posts, but in case you don't know, I've been watching wrestling for almost 30 years.  I started in 1983 with Wrestling at the Chase (St. Louis) and World Class Championship Wrestling.  Soon I added WWF Superstars, Tuesday Night Titans, and Georgia Championship Wrestling to my palette.  There was also the NWA and Central States Wrestling thrown into the mix as well as the AWA running on ESPN.  It was great.

Wrestling was all PG rated back then, and that was okay.  I still don't have a problem with the WWE taking it back into that direction today.  It doesn't take away from the product.  It doesn't insult my intelligence.  In fact, I want my son to grow up and enjoy wrestling too. 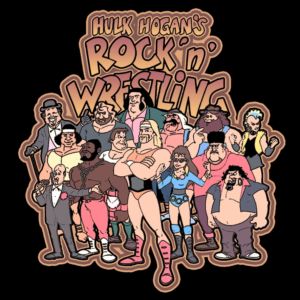 One of the things I remember about wrestling from my childhood is the larger than life characters.  Many of them were like cartoon characters.  And for those who watched the WWF back in the mid 80's know there literally was a cartoon.  It ran on Saturday mornings on CBS and was called Hulk Hogan's Rock N Wrestling.  You may not know that Brad Garrett (Robert on "Everybody Loves Raymond) was the voice of Hulk Hogan and James Avery (Uncle Phil from "Fresh Prince of Bell Air) played the Junkyard Dog.

The cartoon featured a gang of babyfaces lead by Hogan.  Besides he and JYD, there was Andre the Giant, Superfly Snuka, and Wendi Ritcher among others.  Rowdy Roddy Piper lead the heels like Iron Sheik, Big John Studd, and the Fabulous Moolah.  Each week the superstars would find themselves in unusual situations like Hogan and Nikola Volkoff going into outer space and having to coexist.  It was good, mindless entertainment.  Of course I was a tween at the time and didn't know any better.

With the talk of a WWE cable channel, it would be interesting to see if they'd ever bring back this concept.  It would be hard to do it as a baby face vs. heel show though because there are so many guys who flip flop.  But it could be fun. 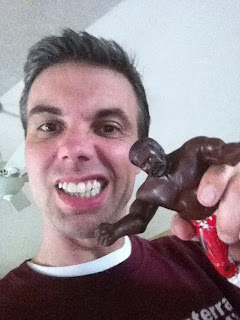 Another favorite childhood memory with wrestling is the old LJN figures.  They were introduced in the summer of 1985.  I was 12, and up until then had been using my Star Wars figures as wrestlers.  I pretended that Chewbacca was Andre the Giant. Han Solo played the role of my favorite at the time, Kerry Von Erich.

So I was stoked when LJN released this figures.  I felt a rush every time we'd go to the store and find a new figure or when a new lineup would be introduced.  Remember, back then there was no internet, we had no knowledge of when new toys would be released or what they'd look like.

I collected the LJNs until I was about 16 years old.  The last two I bought, Slick and Ted DiBiase, I found while we were on vacation in Canada.  I loved those figures, and as you can see by the picture, I still have them today. 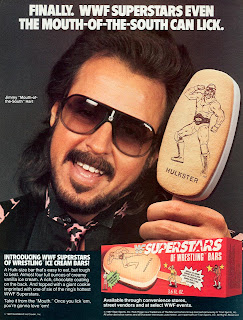 Finally, who could forget about the WWF ice cream bars?  As I searched for an image of them, I discovered they WWF sold ice cream bars three different times.  I guess I had forgotten that.  My best memory is of the mid to late 80's.  The only time I could find them was when the ice cream man came into our neighborhood.  I always ended up with the Junkyard Dog.  If I remember correctly each bar came with a card of some kind too.  Characters included of course Hulk Hogan, Bobby Heenan, and Ricky Steamboat.

Then in the 90's another line of bars was released.  Lex Luger, Bret Hart, and Yokozuna were among the superstars featured.  Then in the early 2000's, Chris Jericho, the Rock, and Stone Cold Steve Austin adorned the frozen treats.  I don't remember those at all.

I wouldn't mind seeing the E try something like this again either.  Heck, they could even do a breakfast cereal based on John Cena, right?