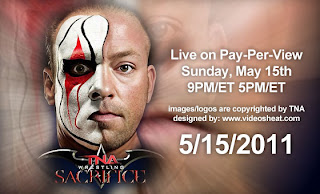 While I have sworn off RAW, SMACKDOWN and IMPACT for the foreseeable future, a friend invited me to watch TNA’s SACRIFICE pay per view, so I figured why not watch and do some live running commentary. Will this reinforce my decision to stop watching TNA, or make me interested in what will happen this Thursday? Let’s find out. On to the show.

In the opening commentary, Mike Tenay puts over the Jarrets vs. Kurt Angle/Chyna match before mentioning the World Title match. UGH.

Opening match is Mexican America vs. Ink Inc. If this were WWE, I’d expect Jessie Neal to be laid out with the Mexican flag draped over him after the match. Still not sold on Aquinas (or whatever his name is. Still comes off as a taller Chavo Guerrero.) Lots of interference by Rosita and Sarita during the match. Jessie Neal takes a sick looking Dominator to end the match.

For some reason Christy Hemme is doing the ring announcing.

After the match Mike Tenay introduces us to the start of the Impact Wrestling era, yet the graphic behind him says TNA SACRIFICE. Seriously, does anyone in this company know what the name of the company is now?

Once again, the mixed tag team is mentioned before the title match.

Jeff Jarrett and Karen Jarrett (in a foot brace and on crutches) are out to talk. Jeff is explaining how Karen injured herself. Crowd chant’s "bulls&*t." Jeff tells them the PPV audience doesn’t need to hear their filthy language. Jeff says there will be no mixed tag match tonight. Here comes Mick Foley. Why is the network consultant on PPV? Mick claims the x-ray was really that of a 6’6" African-American male. What? Mick with the "wrestling matters" tagline. Guess wrestling matters…until promos matter. Karen claims she has nothing to wear for a match. Mick says he had Jolene make an outfit for Karen. Why do I feel the outfit will be something ridiculous?
Jeremy Borash backstage interviewing Brian Kendrick. Did they switch JB’s and Christy’s duties?

Kendrick with a long-winded promo on what the X-Division is about and his match with Robbie E..
Why does Robbie E. get to be on PPV while Zack Ryder is on YouTube? This match is bad. One positive I can give to the show so far is at least Tenay and Taz have focused on the action inside the ring during the matches. And they’re not arguing. Kendrick wins after several uninteresting minutes. Maybe my lack of watching TNA/IMPACT WRESTLING hinders my opinion of the match as I don’t understand Kendrick’s character.

JB interviewing Tara about the upcoming Mickie James/Madison Rayne Knockout title match. If Mickie wins, Tara is free of her servitude to Madison. Tara is conflicted about who she wants to win. Why? They didn’t say if Mickie wins, Tara is free but fired? And why does Mickie care if Tara is contractually obligated to Madison? Really need to stop looking for logic in TNAIMPACT storylines. Even though Madison told Tara to stay backstage, Tara comes to ringside at the start of the match. Still don’t know why they put the title on Mickie last month when she had an injured shoulder instead of waiting until now. The match has gone longer than most WWE Divas matches. I guess that’s a plus. Madison keeps telling Tara, Madison owns her. Ref bump in a Title match. Shocking. Madison gets a loaded glove from under the ring. Tara rips the glove off Madison. Madison with a quick roll up and handful of tights gets a two count.  Am I the only one who thinks the Hardcore Country nickname/catchphrase for Mickie James makes no sense? Another ref bump. Shoot me now. Tara in with the loaded glove on her fist. Madison instructs Tara to hit Mickie. Tara hits Madison. Ref counts the pin fall for Mickie. Blah. Total storytelling match.

JB interviews Fortune. Kazarian tells Max Buck he couldn’t be a star if he was thrown by a ninja. AJ Styles says he doesn’t know what’s going on with Tommy Dreamer. Beer Money talk about their match with Matt Hardy and Braden Walker.

Kazarian vs. Max Buck for the X-Division title up next. Still don’t know why they split up Generation Me. If this match isn’t any good, they should probably stop the PPV because there’s no hope of salvaging the show. Max Buck is from Southern California while Kazarian is from Anaheim, California. Why doesn’t Max get a city? Tenay mentions the Bucks have reunited. That’s good to hear. Match seems to be very pedestrian. Not terrible, but I don’t feel Max Buck has any chance of winning the title so I can’t get emotionally involved in the match. And Kazarian wins.

JB talking to Abyss backstage about his upcoming match with Crimson. Abyss talks about how he’s been beaten, cut, had his teeth knocked out and kept going. Crimson is undefeated. How many matches has Crimson had?

Crimson has been in TNA for almost 5 months. I don’t recall his last PPV match. In the words of Jim Ross, this could be bowling shoe ugly. Abyss brings out "Janice" the board of nails. I really want to see someone get impaled with board. Not because I’m some psychopath, but because bringing out a weapon time after time and never having it actually used is stupid. Yes, I know Crimson hit Abyss with Janice, but that wasn’t during a match so it wasn’t "legit." If I had insomnia, I would put this match on a loop. I would be asleep in no time. Finally, Crimson gets the victory with a sky-high power bomb.

Tag Team Title match up next. Beer Money vs. Matt Hardy/Chris Harris. Matt Hardy is now called Cold Blooded. This should lead to him coming out dressed as Glacier. Chris Harris isn’t as big as he was during his short Braden Walker WWE stint, but he’s still bigger than his America’s Most Wanted days. The continuing theme of the night, decent action but no emotional involvement. Beer Money wins after hitting the old AMW finishing move, Death Sentence.

Okay, I’m once again tapping out. There’s nothing left on this show that interests me. Sacrifice hasn’t been bad, but it feels like a commercial free version of Impact.

To give you an idea of how uninteresting Sacrifice was, I stopped watching the show to get together with friends and watch The Rage: Carrie 2. If you haven’t seen The Rage, you haven’t missed anything. It’s a poorly made movie. But riffing on it for two hours was more entertaining than Sacrifice. I did read the results of the last three matches and don’t regret my decision to stop watching. I’ve mentioned how I’m tired of seeing John Cena and Randy Orton as champions in WWE, well, I’m just as tired of seeing Mr. Anderson and RVD getting title shots in TNAIMPACT. Can we please get some new challengers to the title?

Coming tomorrow is a blog about a company that knows how to put on good shows and tell good stories while providing solid in ring action.
Posted by Kevin Hunsperger at 5:06 AM