What's in a Name?

It's not often that you'll find me writing something positive about TNA, but I'm going to today.  On the Thursday night episode of Impact, (which I did not watch all of, but parts of) it was announced that the company will now be called Impact Wrestling.  The tag line is "Wrestling Matters Here."  Several stars from the company offer their reaction on the video link provided.

This is an obvious play off of WWE's recent announcement that they're simply known as WWE now and not World Wrestling Entertainment.  For pure wrestling fans, this is likely to have some kind of (pardon the phrase) impact on business.  The important thing though is for Impact Wrestling to follow through with this message.

That's where my concern comes into play and I will be a little negative.  Hopefully more constructive though.  While the name has changed, as far as I know the people running the show have not.  As long as Vince Russo, Hulk Hogan, and Jeff Jarrett continue on as they have, Impact Wrestling will have the same problems that TNA has had.  This is an excellent time to rebrand and rebuild.  It's my hope that Impact Wrestling will become a legitimate competitor to the WWE. 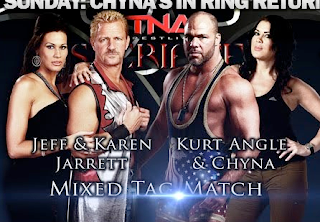 And while changing the name is a step in the right direction, I also think they took a step back with the introduction of Chyna as Kurt Angle's "partner." That's been one of our complaints about the company in the past.  They are too reliant on past WWE stars and using them as major players in their angles.  It's my understanding Chyna is not even under contract with the company right now.  With typical Russo style booking, Chyna will likely turn on Kurt and align herself with the Jarretts.

But I want to stay optimistic about this announcement.  I really do hope it leads to more focus on wrestling and developing homegrown talent.  I want to see more of AJ Styles, Beer Money, and Eric Young.  Besides taking the focus off of past WWE and WCW stars, here are some other suggestions.

*Stop playing hot potato with the titles.  I think both companies do way too much of that right now. This could be another way for Impact Wrestling to show they're a legitimate alternative.

*Keep the face/heel turns to a minimum.  It seems like someone is screwing someone over all too often on the show.

*Push more tag team wrestling.  That's one area we can all agree the WWE sucks at right now.

*Do not let Hulk Hogan or Ric Flair win the world title.  In fact, get it off Sting too.  Focus on the youth.  Hogan, Flair, and Sting are all legends.  Move them into other roles in the company.  Their experience and guidance are assets, but it's time to pass the torch.

I hope this wasn't too negative, as I really want TNA to succeed.  Just like when WCW nipped at the heels of WWF back in the 90's and eventually dominated for a while, it made the WWF's product better. It forced Vince and company to get competitive.  While I won't say this is the start of a new war, it's at least on the surface as step in the right direction.  (Again, I didn't watch all the show, so it may have all been crap after the announcement from Foley.)