Not All Wrestling Companies Are the Same

As I mentioned in my last blog, WWE and TNA have pushed me past my breaking point with their reluctance to push new stars and storylines that have logic gaps so big they make Armageddon look plausible. I have so far kept to my vow to not watch Raw, Smackdown or Impact for the past couple of weeks. Though I did watch most of Sacrifice.

While WWE and TNA may have turned me off to the current mainstream-wrestling product, there is another company that has me eagerly awaiting their next round of monthly shows. That company is based in Eastern Pennsylvania and is called, CHIKARA.

In an attempt to cleanse the negativity from the my123cents blogs, I’ve decided to try and spread the word about CHIKARA so that if there’s anyone else out there who may be feeling the same way I am about wrestling in general, they will know there is a promotion who understands the fundamentals of storytelling and solid wrestling.

CHIKARA is in their 10th season, yes season.  Until a few years ago, CHIKARA ran shows from February through November.  December and January were the off-season months.  As the company has grown, so have the number of shows which now include the season kickoff in January and the season finale in December.  Having a season is one of several unique features about CHIKARA.  Because they view each year as separate somewhat self-contained season, there is usually one large over arcing storyline told throughout the year with several small storylines mixed in as well. 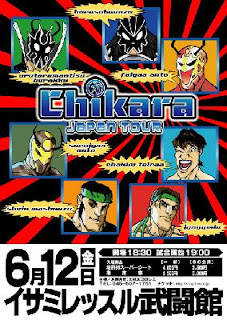 Don’t start thinking these storylines only exist in the span of whatever season they take place in though. CHIKARA is probably the only wrestling company whose memory stretches back to their beginning. One of my friends who is also a CHIKARA fan once commented CHIKARA is the LOST of wrestling promotions. Sure you can jump into any show and be entertained, but there’s a lot of back-story and subplots that you won’t fully comprehend with only a one show viewing. Unlike LOST, CHIKARA hasn’t lost focus of where they’re going. Not only does the company do a good job with keeping their history alive during each season, the commentators never neglect to inform the viewer of past feuds or events that have significance to the ongoing match. The reason storytelling is important to CHIKARA is due in part to CHIKARA founder, "Lightning" Mike Quackenbush being an avid comic book fan. A lot of CHIKARA DVD covers are homage’s to comic book covers, and a lot of the storytelling aspects are derived from different comic book stories.

CHIKARA’s acknowledgement of history is only a small part of why I enjoy the company. Their roster is made up, I believe, of mostly guys who have gone through the CHIKARA Wrestle Factory training school. There are no big names on their shows except during the King of Trios tournament, unless someone really impresses and they decide to bring them back for a few shows. Even then the biggest name they’ve had do multiple shows with an ongoing story line has been Glacier. The unknown factor of the majority of the roster is appealing because you get to see wrestlers grow into personas and watch them become better wrestlers. I can understand this might not appeal to everyone. A lot of people probably don’t want to see rookies earning their stripes and would prefer to see seasoned guys who rarely mess up. For me there’s something about seeing someone debut and watching them mature that helps form a connection to the person. It’s like discovering some unknown band or musician and watching them go on to achieve stardom.

Since CHIKARA is influenced by the Lucha Libre style of wrestling there are a lot of masked wrestlers and wacky gimmicks. When I’ve tried introducing friends to the CHIKARA roster, I’ve gotten a lot of "are you serious" looks and comments from them when they first see some of the wrestlers. I don’t know if any realm outside of CHIKARAland would be fitting for a trios team called the Colony which is comprised of Soldier Ant, Fire Ant and Green Ant.  Or the Osirian Portal team of "the Funky Pharaoh" Amasis, Hieracon (who wears a mask that looks like an bird) and Ophidian (who’s mask resembles a cobra and has been known to hypnotize his opponents.) Over the years the outrageous characters have kind of fallen by the wayside, though some of the older "stars" may make an occasional appearance, now the roster is made of solid wrestlers who just happen to not be your generic 6’2" 240 pound guy with a six pack and tribal tattoos.

Before telling more about the promotion, I’ll share my CHIKARA story.  I discovered CHIKARA in 2005 right before their annual Tag Team Grand Prix tournament. Tag Team Grand Prix was discounted after 2006 when CHIKARA crowned their first Campeones de Parejas. The following year the now traditional King of Trios tournament took the place of Tag Team Grand Prix. Back to 2005, I was intrigued by this promotion I’d never heard of before. When my original vacation plans fell through, I was scrambling to find something to do for a week in May. As fate would have it, CHIKARA was running their monthly weekend of shows the same time I had an open schedule. After mapping out a route, I made the 15-hour drive from southern Illinois to Reading, Pennsylvania. After a few hours of sleep, since I had driven though the night, I headed out to The Riverside in Reading for a night of CHIKARA action. I think the Riverside is similar to a Legion Hall or Elk’s Club. That night there were maybe 30 people in the crowd. Twelve of who were from the local home for the mentally impaired. While it may not have been a large crowd, the action and entertainment of that night cemented by ne- found obsession with CHIKARA.

I attended another show the next night in Emmaus, Pennsylvania in a similar sized building. There was a slightly larger crowd that night and the atmosphere in the place I would put up against any WWE/WCW/TNA show I’ve been to with the exception of Wrestlemania. In the span of 48 hours I was hooked on CHIKARA. For the remainder of 2005, I bought all the major CHIKARA DVDs. From 2006-2009 I bought EVERY DVD. During the summer of 2009 when my DVD collection had grown to around 750 discs, I started to examine my life and decided to get rid of anything deemed unnecessary in an attempt to live a more minimalist lifestyle. A goal I’m still trying to achieve. This life choice resulted in getting rid of over 550 DVDs. Sadly, I ended up selling all my CHIKARA DVDs. It’s a decision I’ve been regretting over the recent months.

Part of the decision to sell the DVDs was due in part to the direction of CHIKARA in 2010. The big storyline of the year was the invasion of a group called Bruderschaft des Kreuzes (Brotherhood of the Cross). When the BDK were unveiled at the end of 2009, I was excited at the prospect of the following year. Unfortunately, in my opinion, the BDK dominance quickly became very similar to the NwO invasion and I lost interest in CHIKARA.

Recently my interest has been revived and I’ve been wishing I had some of the older shows to go back and watch. Part of my resurgence is because of my lack of interest in WWE and TNA and wanting to see good wrestling. And part of renewed interest is because CHIKARA is a fun and entertaining promotion. I ordered the King of Trios DVDs and was not only impressed by the CHIKARA roster, but feel Sean Waltman who returned to his 1-2-3 Kid persona for the weekend had three of the best matches I’ve seen him wrestle since 1999.

I’ve been thinking about this blog for the past few weeks trying to figure out what I wanted to say and how to say it in less than 10,000 words. One of the main points I wanted to try and get across is why CHIKARA ha the effect on me that it does. The simple reason is, CHIKARA is fun. Watching CHIKARA takes me back to when I was a kid watching wrestling. Maybe it’s because I don’t know anything about the behind the scenes activities. I don’t know if the seemingly typical backstage drama goes on in the CHIKARA locker room. Nor do I care. When I watch a CHIKARA show, all I’m focused on is what’s happening in the ring. Thankfully, the in ring action grabs my attention and doesn’t let go until the end credits roll. I don’t know if Mike Quackenbush does all the booking and writing himself or if there’s a CHIKARA writing staff. All I know is whoever is responsible is doing something right.

Another aspect that I enjoy about CHIKARA that both WWE and TNA could learn from is CHIKARA is a family friendly company. There is no foul language during the shows. There are no story lines that would be considered risque and yet CHIKARA manages to put on entertaining shows with feuds that captivate the audience. For everyone who complains about WWE being PG and missing the Attitude Era should really check out CHIKARA and realize PG doesn’t hinder good storytelling.

Currently CHIKARA has the Campeones de Parejas and Young Lion’s Cup. The Young Lion’s Cup is a yearly tournament consisting of guys under the age of 25. The winner of the tournament defends the cup until the next tournament. The Campeones de Parejas though, only get defended when a team has earned a title shot. In order to get a title shot, a tag team must earn three points, which is three consecutive victories. If a team has 1 or 2 points and loses their next match they go back to 0 points. I like this concept because it makes the titles look important and builds up the team who is challenging for the championship. There are no random title matches thrown on a card just to get it on there. By having a system in place where challengers have to earn the right to get a title shot, it makes the title matches mean something.

Starting with this weekend’s shows, CHIKARA is kicking off the 12 Large Summit to crown their first singles champion. Twelve members of the roster, who were voted into the tournament by the roster, will compete in a round robin tournament throughout the year with the champion being crowned on November 13th. I eagerly await this tournament and foresee my DVD collection growing again.
My biggest complaint with CHIKARA is that the only way to really follow them is to buy their DVDs. I wish they would jump on board the growing trend of doing Internet PPVs or establish a video on demand service to watch their shows online. But if that’s my only complaint with the company, I think I can live with it.

While I’ve said quite a bit, I don’t think I’ve said enough to really get across how awesome CHIKARA is and why you should be checking them out. If you want to check them out, their official website. Their YouTube channel is. And you can get CHIKARA DVDs by clicking here.  If anything, I’d recommend checking out their weekly Podcast A Go Go to stay up to date with what’s going on in the world of CHIKARA.