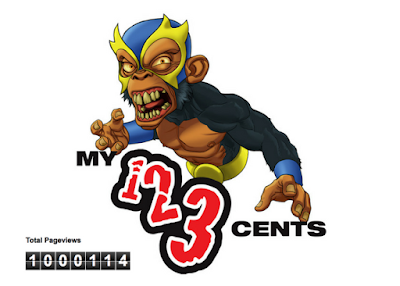 Over the weekend the My 1-2-3 Cents website hit a milestone. Sunday evening the counter reached 1,000,000. I'm not going to lie, I've been waiting for this moment since I started the My 1-2-3 Cents blog in 2010. Yes, it's been just over seven years and I had hoped growth would happen faster. But I'm grateful none-the-less.

Readers of this blog are the ones to thank for the continued growth. I have a few specific shout outs I'd like to make here though. I consider Jeff Rose my blogging mentor. It was his idea for me to start a pro wrestling blog. In the early years, I had trouble increasing numbers. I got frustrated and there were times I thought about calling it quits. Instead, I tweaked my approach and added "life" and "pop culture" to the tagline.

Along the way, I became friends with Tom Harness at Harness Digital Marketing. He suggested changes in the layout of my blog and gave me ideas on how to get the word out on social media. Then in 2016, I got inspired to start a blogging streak, thanks in part to Gary Vee. I've continued that tradition to this day (between here and my other blog page KevinHunsblogger).

When I started the KevinHunsblogger page, I decided to return My 1-2-3 Cents to its roots of being a pro wrestling blog. Since March 2017, everything posted here has been wrestling related. I have found in recent months the posts I write about independent wrestling, specifically Stride Pro Wrestling, get the most reads.

I've had a few guest bloggers through the years too, most notably Chad Smart. We've been friends for more than a decade and have been to nine different WrestleManias through the years. I appreciate his help and the prizes he sends to give out to readers and listeners (the My 1-2-3 Cents podcast started in 2014).

And that brings me to this. Now that the million reader milestone has been reached, I'm going to celebrate with a giveaway. Just head over to the My 1-2-3 Cents Facebook page, like it (if you haven't already) and comment on this post. Thanks, everyone.

Posted by Kevin Hunsperger at 7:21 AM