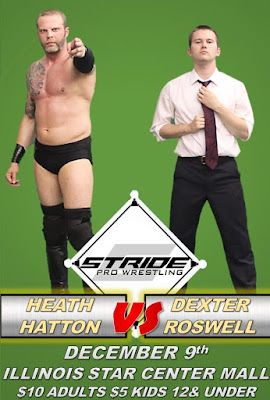 One year ago, Dexter Roswell appeared at Stride Pro Wrestling's Christmas/Star Wars show vowing to "Make Stride great again". Personally, I've always believed Stride was great. But Roswell and his party of followers are on a mission to make things even better. I suppose you could argue if Roswell is succeeding in his mission.

There is one thing for sure. He is making tag team wrestling great. Last month he and Scott Phoenix devised a plan along with manager J. Wellington Beauregard to screw Ax Allwardt. You can read more here, but the end result is Roswell and Phoenix are now the Stride Pro Wrestling tag team champions.

But not only does Roswell have Allwardt to worry about, he's also raised the ire of Heath Hatton. Roswell was instrumental in Hatton's lose of the Legacy Championship to Tony Flood in October. Now Roswell and Hatton are slated to wrestle at the Buried Alive show on Saturday, Dec. 9. Hatton has revenge on his mind, while Roswell is likely still soaking in the glory of winning his first championship.

This will be an outstanding match, I have no doubt. Hatton trained Roswell in the early days of the Stride Pro Wrestling school. Roswell learned a lot from Hatton during those sessions and has put it to good use in the ring. But in my 1-2-3 cents, a good teacher never lets his students know everything. And Hatton will use that to his advantage Saturday. Roswell is destined for greatness, that I am sure of, but Hatton is the one driving him there.

They say the only way to get better is to have opponents better than you. Saturday night that theory will come to life. Hatton will test Roswell in ways he's not been tested in the ring. And I'm sure that Roswell will pass the test, I just hope he does so without having to cheat. Join us at 6:30 p.m. at the Illinois Star Centre Mall in Marion.