Centy Claus is coming to Stride 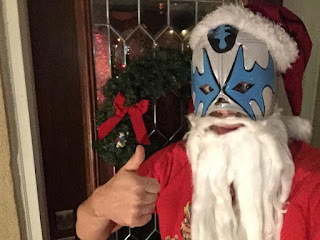 Centy Claus is one of the many characters I came up with when doing regular videos on the My 1-2-3 Cents YouTube channel. He shows up every year around Christmas. This year, he's left some gifts for the men and women of Stride Pro Wrestling.

For new Stride Pro Wrestling Champion Jay Spade: An injury-free run as champion. You've worked hard to get to where you are and prove that the size of a person's heart is just as important as their stature.

For former Champion Roger Matheus: A rematch for the heavyweight title. You were the most dominant champ in Stride's history. Don't let one loss judge the reign of this wrestler.

For Legacy Champion Chris Hargas: Continued momentum after winning both Buried Alive and the Legacy title within a week of each other. You are ending the year on a high note after surviving one of the most physical matches we've seen in Stride.

For Dexter Roswell: An endless supply of hand sanitizer. You're going to be shaking a lot more hands as Stride continues to grow in popularity.

For Scott Phoenix: A lifetime supply of whatever shampoo it is that makes your hair the envy of the Stride Pro Wrestling locker room. And one lucky lady to actually accept your digits.

For J. Wellington Beauregard: Protective gear. You continue to make men like Ax Allwardt, Heath Hatton and Jerry Travelstead angry. You're going to need something to protect yourself.

For Ax Allwardt: Five minutes alone in the ring with J. Wellington Beauregard, without the abovementioned protective gear. Also, a tag team partner who can appreciate a cold beer, loud 80s music and a thick steak from time to time.

For Heath Hatton: Baby oil and someone with warm hands to apply it. But on a serious note, the continued respect and admiration from fans and colleagues for bringing indy wrestling back to southern Illinois.

For Frank Wyatt: More money from J. Wellington Beauregard to make up for the beating you took at the hands of Heath Hatton in Woodlawn.

For Brian Richards: A face mask to keep your beardless face warm since losing to El Magnifico.

For El Magnifico: A pinata that won't break.

For Aaron Edwards & Nathan Brag: More respect from the leader of your "party".

For Bull Bronson: A welcomed return and a championship opportunity.

For Jerry Travelstead: Continued success with the fundraising efforts you get behind with the Stride shows. Your efforts are appreciated more than you know.

For the fans of Red Daniels: Peace and understanding in the wake of this month's Buried Alive match that led to Red's demise.

For "Farmer" Billy Hills: A clean bill of health from the doctor and the wisdom to mend some broken fences.

For Shane Lauder: Determination. You've been trained by some of the best in Stride Pro Wrestling, keep working hard and aiming high.

For Sam Hunter: A lifetime supply of fish sticks and the ability to enjoy them without the ridicule of J. Wellington Beauregard.

For referee Lane Austin: Those pecs you've been pumping so hard for and a night without Hunter yelling "Lane sucks".

For Jim Kelton (the sound guy): A new laptop.

For Stride Pro Wrestling fans: A happy and healthy 2018 and more appearances by past guests like Ace Hawkins, Brandon Espinosa and Daniel Eads.