Another weekend of wrestling has come to a close. Stride Pro Wrestling held two shows in December. Buried Alive a week ago and last night a benefit show at Woodlawn Grade School. Both shows were amazing and history-making. I'll go into all the details in this week's My 1-2-3 Cents podcast. But for this blog, I wanted to congratulate Stride's two new champions.

First, Chris Hargas ended the second Legacy Championship reign of Tony Flood. These two put on an amazing match. Hargas, the bigger and stronger of the two, took it to Flood, who never disappoints in the ring or on the mic. Flood injured his shoulder during the course of the match and Hargas wisely worked it throughout. He captured the champion in a cross face (the same move he knocked Red Daniels out with at Buried Alive). Flood, who was in a lot of pain, could do nothing but tap out.

The crowd went nuts as Hargas was handed the Legacy Championship. The win marks Hargas' first championship reign in Stride Pro Wrestling. However, we know he's held god in other companies around the region. With 16 years of experience, Hargas brings a lot to the Stride ring and will continue to make the Legacy Championship a meaningful title just as Flood did. I congratulate not only Hargas but Tony as well. Both men should be applauded for the match they put on.

Stride Pro Wrestling has a new heavyweight champion too. Jay Spade, the literal underdog, overcame the odds and beat Roger Matheus in a Last Man Standing match. The two spent about 30 minutes beating the crap out of each other. Cookie sheets, chairs and even a plastic "Wet Floor" sign were used as weapons during the match. Both men also deserve a lot of respect and admiration for the efforts they put forth. 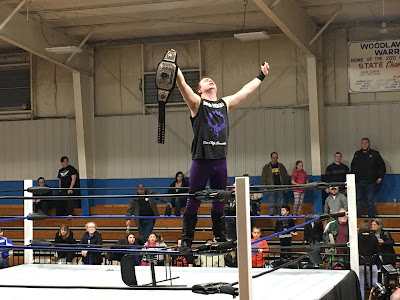 Spade's victory and emotional response gave me goosebumps as I announced him as the champion. I've known Jay since 2011 in the early days of All American Pro Wrestling's run on television. My first impression was he's a little guy, but he has a big heart. His match against Eric Wayne sticks out to me because Spade was willing to do whatever it took to put on a great match, which included climbing the balcony and jumping from it. 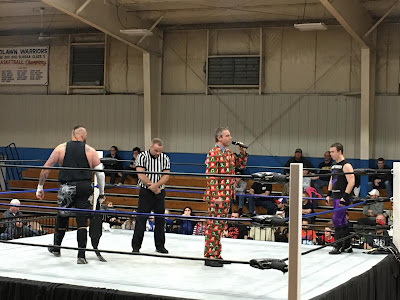 Spade proved Saturday night you don't have to be a giant or a muscle-bound monster beat a bigger foe. His tenacity and intestinal fortitude have finally landed him his first singles championship in Stride. I'm proud of him and what he's accomplished through the years.

Keep up with all the happenings in Stride Pro Wrestling right here. Look for our next show, coming up on Saturday, Jan. 13 at the Illinois Star Centre Mall in Marion.


Posted by Kevin Hunsperger at 1:05 PM