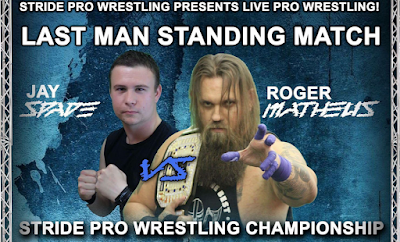 Stride Pro Wrestling's 'David & Goliath' story comes to a close this weekend. Jay Spade challenges in Roger Matheus for the heavyweight championship one more time. This contest will be a Last Man Standing match, following up on the previous two matches Matheus and Spade have had.

It's been well documented Matheus is the larger of the two athletes. He towers over Spade when they're face to face and nearly doubles his challenger's weight. However, Spade has the heart and passion of that has helped this underdog achieve success in the wrestling business for several years.

At the contract signing last week, Matheus faked a bum knee only to attack Spade with a crutch. Matheus himself started the ten count, only to see Spade spring up to his at eight. Just as Spade was ready to give Matheus a taste of his own medicine, the champ turned tail and left the ring, promising Spade and the fans he'd be ready Saturday.

The rules of a Last Man Standing are quite simple. Beat the hell out of your opponent and render him unable to answer the referee's count to ten. If Spade uses his speed and gets Matheus to chase him, he could wear down the champ and take advantage. However, if Matheus uses his size and strength it could be an early night for the challenger. Either way, it's going to be a fight you don't want to miss. 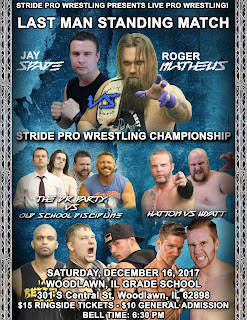 Don't forget, Saturday's show is a fundraiser at Woodlawn Grade School. Bell time is at 6:30 and tickets are $15 for ringside and $10 for general admission.

Posted by Kevin Hunsperger at 11:17 AM