Old school is in session 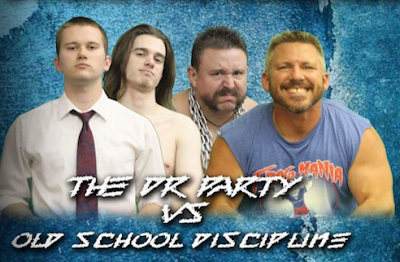 The rivalry between Jerry Travelstead and Dexter Roswell has been well documented. In October you may remember Roswell lost a paddle on a pole match to the school administrator turned pro wrestler. You'd think that experience would have straightened up Roswell, but the DR Party leader has only been up to more hijinks in the months that have passed.

He cost Heath Hatton the Legacy Championship and along with Scott Phoenix and manager J. Wellington Beauregard screwed over Ax Allwardt and won the Stride Pro Wrestling tag team championship. Huge mistake. Ax is out for blood now and nearly got his revenge earlier this month.

However, Stride General Manager Sam Hunter is giving Ax and Jerry an early Christmas gift. The unlikely duo of Old School Discipline will team up to face Roswell and his party's enforcer, Brian Richards. Because there are multiple members of the DR Party, the "Freebird" or "New Day" rule will apply to title defenses, especially as Phoenix continues to recover from his shampooing injury.

Revenge will be sweet no matter what, but I know Ax really wants to get his hands on Phoenix when he returns. Battering Richards and Roswell should bring some smiles to an otherwise grumpy Allwardt. And T-Dog will enjoy whipping the DR Part members again. Old School Discipline has much to gain Saturday and I'm not so sure the tag titles matter as much as teaching their younger foes a lesson or two in old school wrestling. 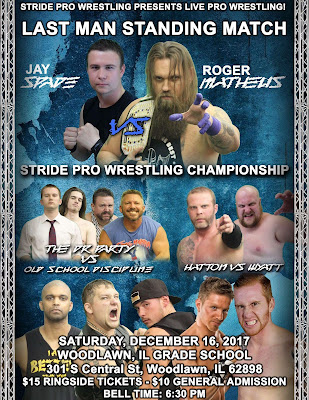 The tag team title match is one of many matches set for Saturday's show in Woodlawn. The event is a fundraiser for Woodlawn Grade School. Bell time is 6:30 and tickets are $15 for ringside and $10 for general admission. See you there.
Posted by Kevin Hunsperger at 9:58 AM