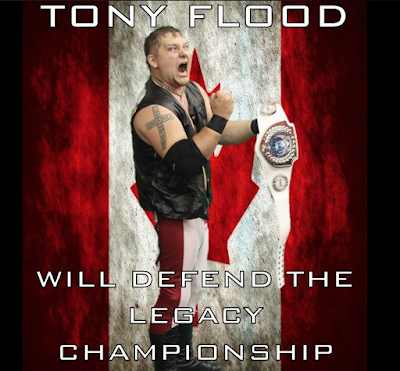 Stride Pro Wrestling has three championships. The heavyweight and tag team titles were established in the early days of the company. The first Legacy Champion was crowned in November 2016. Sometimes so-called secondary championships are overlooked, but the Legacy Title is a valued and well-defended championship here in Stride. Here are a few facts about the title.

1. The first person to hold the Legacy Championship was Jerry Travelstead. He won a tournament and beat Tony Flood in the finals at Community Consolidated 204 School in Pinckneyville. This was Stride Pro Wrestling's first ladder match as well.

2. Even though Tony Flood is technically the second man to win the Legacy Title, it was El Fabuloso who pinned Travelstead for the victory. Moments after the win, Fabuloso unmasked and revealed himself as Flood.

3. Flood has been Legacy champ most of 2017. He lost it for a week to Heath Hatton but regained it after some help from Dexter Roswell. Now he faces a big challenge from Chris Hargas. On the heels of winning Buried Alive against Red Daniels, he's getting a shot at cementing his 'legacy'.

Bell time is 6:30 p.m. Saturday at Woodlawn Grade School. We'll see you there.

Posted by Kevin Hunsperger at 10:40 AM