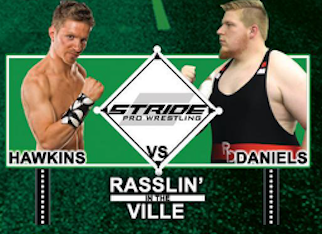 Ace Hawkins makes his return to the Stride Pro Wrestling ring at Rasslin' in the Ville this Friday night. At the show, the MWR Missouri champion battles Red Daniels. (Ace's title is not on the line Friday night for this match.) As I've documented before, Daniels is one of the most talented and dangerous competitors on the Stride roster.

He clearly will have the size and strength advantage over Hawkins. Daniels' anger must also be a factor to consider as he gears up for Ace. Just last month Red had a brutal no-disqualification match against Chris Hargas. In a desperate move, Daniels pulled a fan into the path of Hargas. Hargas hit the woman and ended up getting suspended. That's why he's not appearing on this show.

Some may consider Hawkins less of a threat than Hargas, but don't be fooled by the size difference. Ace is one of the most experienced and talented wrestlers on the independent scene. I first took note of Ace during his time with All American Pro Wrestling. He and Brandon Espinosa had some of the greatest matches in that company against Team Overkill. Hawkins changed his name for one night in 2012 when Aaron Relic teamed up with Jay Hatton against Ryback at WWE Extreme Rules.

So this match is going to be one for the ages. The two have competed against each other in six-man tag team competition before. Red is hungry and honestly just likes to hurt people. That may hinder him from getting based the seasoned and dynamic champion. But if he catches Ace early into the match, that brutality may end up earning Red a win Friday night.

The action comes to Community Consolidated School 204 in Pinckneyville this Friday night. A meet and greet with Ricky "The Dragon" Steamboat" starts at 5 p.m. The wrestling action follows starting at 6:30 p.m. Call (618) 357-2419 for ticket information.

Posted by Kevin Hunsperger at 6:34 AM