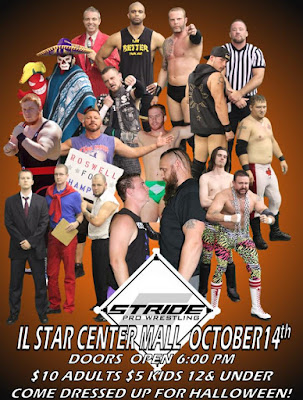 Friday night, Stride Pro Wrestling put on one helluva wrestling show. Rasslin in the Ville was a fundraiser for Community Consolidated 204. Even though I was unable to attend, I've heard from fans and wrestlers alike that it was an amazing show.

Ricky "The Dragon" Steamboat served as the special guest referee for that paddle on a pole match between Dexter Roswell and Jerry "T-Dog" Travelstead. As you can see, T-Dog won that match and his friend and tag team partner Josh Plumlee got to get a few whacks on Roswell. This was revenge for "Stone Cold Plumster" after he suffered a concussion at the hands of Roswell's DR Party at a recent Stride show.

Tony Flood was silenced when Heath Hatton beat him to capture the Legacy Title. If you recall, Hatton and GM Sam Hunter's careers were on the line in this contest. Hatton becomes the first Stride wrestler to hold both singles championships in the company.

Jay Spade beat "Big" Roger Matheus by disqualification in a match for the Stride Pro Wrestling Heavyweight Championship. Because of that ending, Spade has been granted a rematch Saturday night, Oct. 14 at the Illinois Star Centre Mall. But there's a twist this time. It'll be the first time the Stride title has been defended in a best two-out-of-three falls match. I love these types of matches and I have no doubt Matheus will do what it takes to come out as champion as Spade will do whatever it takes to win his first singles title in Stride.

Also planned for Saturday night, Maximum Overdrive defends the Stride Pro Wrestling tag team championships in a fatal four-way featuring the DR Party (who will J. Wellington Beauregard cheer for?), AT Brooks and Joey O'Riley and El Magnifico and JD Wilk. And Chris Hargas gets his hands on Red Daniels in a grudge match.

In my 1-2-3 cents more matches will be announced. Since it is the last show prior to Halloween, Stride officials are encouraging fans to come in costume. It's going to be a fun night for sure. See you there!

Posted by Kevin Hunsperger at 1:53 PM