A decade before Hell in a Cell and 15 years before the Elimination Chamber there was a match called WarGames. Dusty Rhodes is created with creating the cage match concept and introducing it to wrestling fans in July 1987. The Dream got inspiration for the idea after seeing the movie Mad Max Beyond Thunderdome.

The concept included two teams, two rings and a giant cage. The match started as a one on one competition and a coin toss would determine who had the advantage when adding members to the match. The brawling continued until all members of both teams were in the ring and then and only then could the match come to an end. Something I'd forgotten though was apparently pinfalls didn't count. The only way to win the WarGames was by submission or knocking out your opponent. 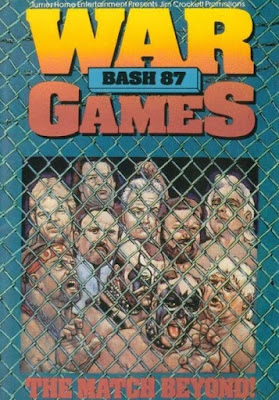 The match concept continued a few times in '87. While the Road Warriors, Dusty and members of the Horsemen were the main staples, other competitors like The Rock 'n Roll Express, Midnight Express, Barry Windham and Big Bubba Rogers had appearances in the early matches.

I don't think I'd ever seen a WarGames match live (on PPV) until 1991. But I saw clips on NWA programming and articles in the Apter magazines. At WrestleWar '91 Flair, Windham, Sid Vicious and Larry Zbysko beat Sting, Brian Pillman and the Steiners. Sid delivered two sick powerbombs on Pillman that looked like they legit knocked out the high flyer. I remember his head hitting the top of the cage before crashing to the match. El Gigante came to the ring and surrendered the match on Pillman's behalf.

WarGames was a great concept. Fans have wanted WWE to bring back the match, but I'd be surprised if it ever happens again. But I'd love to see it happen for old times sake at least once.

Posted by Kevin Hunsperger at 4:29 PM