Seven months ago two men wrestlers appeared at the Star Wars themed Stride Pro Wrestling show. Both wore suits to the ring. At first, I thought Dexter Roswell and Brian Richards were going to remove the dress clothes and wrestle in traditional gear, but I was wrong. After cutting a scathing promo on illegal immigrants in our country, Roswell did battle with Jose Magnifico. It was clear then that Richards was going to be the bodyguard and roughed up Magnifico from outside the ring.

As the months passed, Roswell campaigned to 'Make Stride Great'. He grew the party by another member and the trio of Roswell, Richards and Nathan Brag did what they could to make life miserable for the likes of Magnifico, JD Wilk, Farmer Billy Hills, Chris Hargas and even Heath Hatton. 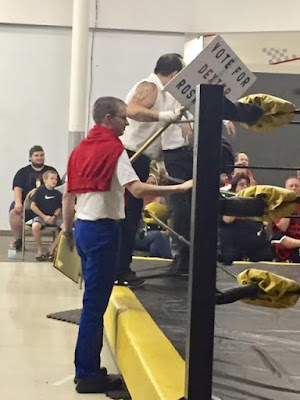 It's finally been revealed who has been funding this campaign of chaos. J. Wellington Beauregard, the man behind current tag team champions, Maximum Overdrive is spending his fortune on the DR Party. The now-public association with J-Wells has already paid off. Brag and Richards picked up a win over Hargas and Magnifico shortly after revealing their new manager. 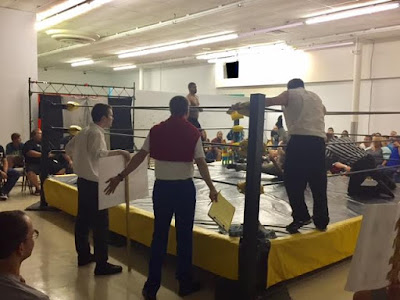 It will be interesting to see what happens next with this relationship. It's possible Beauregard is looking to put a stranglehold on Stride Pro Wrestling as Roswell has been in the hunt for the Legacy Championship. Now with the public support, it may be enough to earn Roswell his first title. Brag and Richards can work together as a team or on their own. This new association could spell disaster for the Stride Pro Wrestling roster. Find out what's next on Saturday, Aug. 5.

Posted by Kevin Hunsperger at 4:34 PM