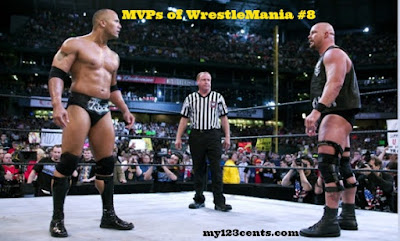 8) The Rock:  It's hard to argue the success the Rock has had in and out of the ring.  His first WrestleMania came in 1997 as Rocky Maivia and he was the defending Intercontinental Champion, beating The Sultan.  A year later he retained the IC title against Ken Shamrock and a year after that he went into WrestleMania 15 the defending WWF Heavyweight Champ.  Yes he lost the gold to "Stone Cold" Steve Austin twice.  But he beat the Rattlesnake at 19 as well as the iconic Hulk Hogan a year before that.  The Rock came back to host WrestleMania and then face John Cena not once, but twice, including another championship match.  I enjoy his guest spots at 'Mania, but I think the "host" role has been a bit overplayed.  I'm hoping for something fresher at this year's event.

8) Steve Austin:  I really tried to stay away from putting Austin on the list as I didn’t want to go with only names that headlined WrestleMania. However, I can’t deny that without “The Rattlesnake,” during the late 90s, we may be doing a list of Starrcade MVPs instead of WrestleMania MVPs. The match against Bret Hart at WrestleMania 13 made Austin THE man in WWE. Title victories at WrestleManias 14, 15 and 17 established Steve Austin as the MVP of the Attitude Era.

In case you missed any...

Posted by Kevin Hunsperger at 12:28 AM