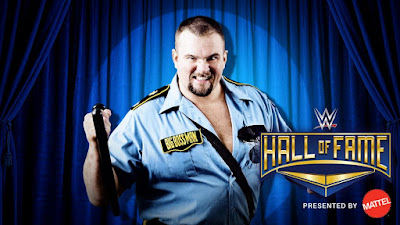 I was happy to see earlier today that the WWE is inducting the Big Bossman into the Hall of Fame this year.  He was one of the best big men in the business.  He captured everyone's attention as Big Bubba Rogers, defending the honor of Jim Cornette and the Midnight Express.

Bubba quickly stepped out of that role and became an established star when he pinned the One Man Gang for the UWF Heavyweight title.  Eventually he'd make to the land of big men, the WWF, and take on a new persona as the Big Bossman.  He prison guard from Cobb County, Georgia almost immediately took aim at Hulk Hogan.  The cage match between the two on Saturday Night's Main Event in 1989 proved to me that Bossman had truly earned his stripes.

A face turn a year later and a significant amount of weight loss made Bossman even better in the ring.  He was quicker and more agile and still as aggressive as ever.  Feuds with Ted DiBiase, Mr. Perfect and The Mountie are a few of my favorite from that era.  He very nearly walked out of WrestleMania VII with the Intercontinental Championship.

But all good things must come to an end and Bossman went back to WCW, under several different gimmicks.  I was happy to see him return to WWF a few years later as an updated version of the Big Bossman.  He and Ken Shamrock won the tag team titles and Bossman held the Hardcore Championship too. But let's not speak of the Hell in a Cell match at WrestleMania XIV or the Kennel from Hell match.

In 1998 I had a chance to interview Ray Traylor (along with Bobby Heenan) who had just left the nWo in WCW.  He's in character for it and it's very brief, but I appreciate the chance to have met him.  May he rest in peace.

Posted by Kevin Hunsperger at 3:31 PM