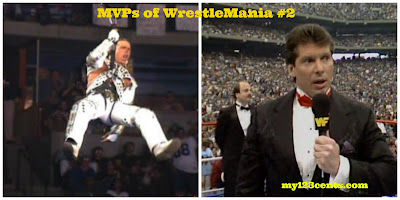 2)  Shawn Michaels:  The Heartbreak Kid is of the most decorated Superstars in the history of WWE.  He has been a HUGE part of WrestleMania, dating back to 1989 when he and Marty Jannetty made their Mania debut against the Twin Towers.  Big Bossman and Akeem took out the Rockers that night and watching the team back then I knew Shawn was special, but I had no idea the icon he'd become.  After splitting with Jannetty and going on his own, HBK had some of the best singles matches the big event has ever seen.

His classic ladder match against Razor Ramon set a new standard in wrestling more than 20 years ago.  He beat Bret Hart for his first WWF World Championship in WrestleMania's first and only Iron Man Match.  That zipline entrance inspired me to do the same thing as my wedding, or at least ask if it was possible.  My wife said "hell no!", but I digress.  His final match during the first part of his WWE career was a torch passing moment to "Stone Cold" Steve Austin at WrestleMania 14.  Years later, he'd return to the company and the big show to face Chris Jericho.  Kurt Angle, Chris Benoit, Triple H and Vince McMahon were all rivals of HBK in that period.  He also took on and lost to John Cena and retired legend Ric Flair in what has become my favorite "in person" WrestleMania match.

Shawn himself would soon wrap up his own career.  A year after the Flair match he wrestled the Undertaker in what many call one of the best Mania matches of all time.  Then at WM 26, HBK put his career on the line and vowed to retire if he couldn't beat the Undertaker and his streak.  The match closed out the show and just like the year prior, Undertaker scooped up and tombstoned Shawn for the win.  He's been back as a referee and to give Sting some Sweet Chin Music.  I'm sure there's plenty more guest spots in his future, assuming he wants to keep being a part of WrestleMania.

2) Vince McMahon: If it weren’t for Vince McMahon, there would be no WrestleMania. Given the events of the past 35 years, if there were no Vince, who knows if wrestling would have any mainstream exposure today. It was a risky move to place all the chips on the table with the first WrestleMania. Looking back at how barebones the first event was, it’s amazing to think how big WrestleMania has grown. From a mid-afternoon, darkly lit wrestling show to a weekend extravaganza with an average of 70,000 fans and larger than life staging, WrestleMania has definitely earned the nickname “Super Bowl of Wrestling.” That is quite the accomplishment for the 70-year old WWE visionary.   Not to mention the handful of times he's competed in the ring at Mania against his own son, Shane, as well as Hulk Hogan and Shawn Michaels.