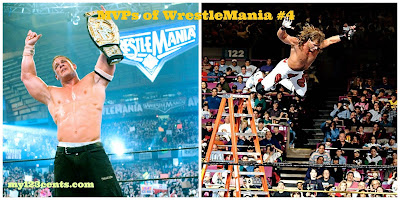 4) John Cena:  Probably an unpopular choice to some, but John Cena has been a staple of WrestleMania for the last 12 years.  This year marks the first Mania without Cena, however I'm not convinced his presence won't be felt.  Cena won the U.S. title at his first WrestleMania and the WWE Championship at his second.  He went on to defend, capture or wrestle for the gold in the years that followed.  It wasn't until 2012 when he was in his first non-title WrestleMania match, but still main evented, losing to The Rock.  His only other non-title affair game against Bray Wyatt at WrestleMania 30.  Winning the U.S. title again at 31 helped give that championship new life.  The John Cena U.S. Open Challenge made an overlooked secondary title great again.  He's also had some pretty cool entrances through the years.

4) Shawn Michaels: Looking at his win-loss record, you’d never guess Shawn Michaels is called, “Mr. WrestleMania.” Shawn lost almost twice as many matches as he won compiling a 6-11 record over the course of his WWE career.  While his record may not be outstanding, one can’t deny that his matches against Razor Ramon, Steven Austin, Chris Jericho and The Undertaker aren’t some of the best in WrestleMania history.
Posted by Kevin Hunsperger at 11:04 AM