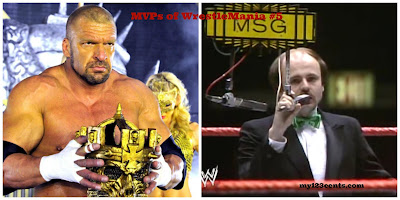 5) Triple H:  Love him or hate him, it's hard to deny the impact Triple H has had on WrestleMania, not just as a performer but a part of WWE management.  Triple H made his WrestleMania debut 20 years ago as Hunter Hearst Helmsley against a returning Ultimate Warrior.  Sure that outing was less than successful, but it didn't take long for HHH to become one of WWE's big players.  He has had several championship matches, including beating Chris Jericho for the Undisputed Championship at WrestleMania 18.

He became the first heel to win a WrestleMania main event at WM 2000.  (I don't count Yokozuna's win at WM 9 because Hulk Hogan walked out that night as champion.)  My favorite Triple H WrestleMania match came a couple years ago when he lost to Daniel Bryan in the opener at WrestleMania 30.  It was a bit of a torch passing moment... kinda.  This year the 46 year old heads into the main event of WrestleMania as the defending champion.  When I watched the Blue Blood get squashed in 1996, I never imagined he'd be the champion 20 years later.

5) Howard Finkel: There is only one person to appear on camera at the first 31 WrestleManias. That man is affectionately known as, “The Fink.”  Legend has it, Fink is also the one credited with coining the term, WrestleMania.  While he is now reduced to introducing the Hall of Fame inductees, it’s no denying the early WrestleManias would have sounded very different without Howard Finkel’s distinctive voice announcing the competitors.

Posted by Kevin Hunsperger at 7:45 AM