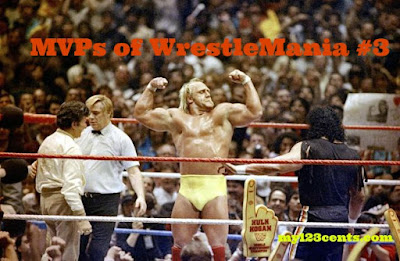 Kevin’s thoughts:  Hulk Hogan was a huge part of the first seven WrestleManias.  He helped launch WWF into the main stream in the mid 80s.  We’ve talked before about the hero being as good as his nemesis.  It’s fair to say those first several years the “bad guys” changed, but Hogan was the man at the top.  From body slamming Andre the Giant at WrestleMania 3 to passing the torch to the Ultimate Warrior at WrestleMania 6 to coming back years later to face the Rock, Hogan has had countless WrestleMania moments.  He won the WWF title at three of the events, including that impromptu encounter with Yokozuna at WrestleMania 9.  Even as recent as ‘Mania 30 and his slip up with the Sliver Dome vs. Super Dome, Hogan reached a new generation of fans.  I hope sometime sooner rather than later, fences are mended between the Hulkster and WWE.

Chad’s thoughts:  While the only time I think I’ve ever cheered the Hulkster was at WrestleMania 1 (I still hold firm that Andre beat Hogan at WM3), it can’t be denied that without the larger than life persona, WrestleMania 1 probably wouldn’t have been as successful. Hulkster was the attraction the first seven WrestleManias were essentially built around to garner interest.

Posted by Kevin Hunsperger at 1:24 AM