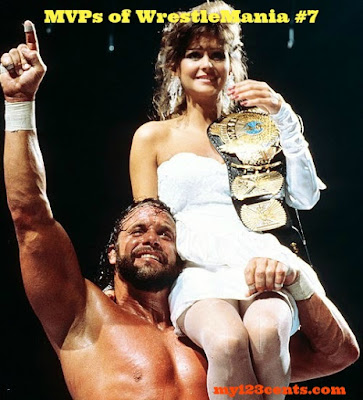 For number 7 Chad and I both picked "The Macho Macho" Randy Savage.

My favorite WrestleMania match of all-time is the battle between Savage and the Ultimate Warrior at WrestleMania 7.  His match against Ricky Steamboat at 3 is among the greatest.  Savage beat four men in one night to win his first world heavyweight title.  I sat in the Kiel Auditorium in St. Louis and watched WrestleMania 4 on closed circuit with my dad that night.  I became an even bigger Macho Man fan that night.  He went on a few years later to win the gold again, beating one of the greatest in the game, Ric Flair.  I hate that he was on commentary for nine and left shortly after beating Crush at WrestleMania 10.  I wish he would have had that comeback opportunity like we saw with Hulk Hogan, Bret Hart and Roddy Piper.

In my opinion, the Savage/Steamboat battle for the I-C title at WrestleMania 3 still holds up as the best WrestleMania match ever. Add in the “Macho Man’s” title tournament win at WrestleMania 4, matches against Hulk Hogan, Ultimate Warrior and Ric Flair and it’s easy to see why Savage is on the list.