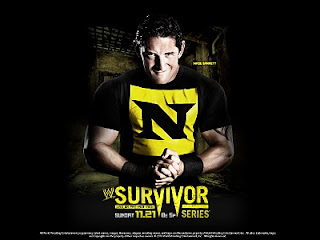 Another Pay Per View, another round of predictions.  I'm very indecisive on most of these matches.   But here's what I'm thinking at this very moment.  Again, I'll say I think the singles matches should have been made into traditional elimination tag team matches, but I'm not getting back on that soap box.

John Morrison vs. Sheamus:  Sheamus has beaten Morrison in all their encounters on Raw.  But Morrison seems to be getting a mini push right now, and honestly,  I like that.  I think Morrison has a lot of potential and could be a main eventer over the next year or two.  I think this match with Sheamus could be the make or break point for Morrison's immediate future.  So, I'm going to go out on a limb and say Morrison wins this match.  But I don't think it will be the end of this feud.  I thought we might get a surprise return out of Triple H, causing some sort of interference and allowing Morrison the win, but I don't know that they'd "waste" his return as an unadvertised thing.

Natalya vs. LayCool:  As much as I'd like to see Natalya win this one, I don't think she will.  If she does, who will she have to defend against?  Right now Alicia Fox, LayCool, and Maryse are the only heel divas on the roster.  (I think that's right)  So the number of possibilities are limited.  Plus, I really think LayCool makes a great heel tandem, and having the belt on them makes fans want to see someone kick their bony little butts.  And I really think they're waiting for Beth Phoenix to return before taking the straps from Michelle and Layla.

Justin Gabriel & Heath Slater vs. Vladamir Koslov & Santino Marella:  Not a big fan of the tag team situation right now.  I'd hate to see them hot potato the belts like they have been doing over the past few months.  I think they need to keep the titles with the Nexus and let these two grow as a team.  More importantly, they need to develop more teams so they have quality opponents to defend against.  So while I like Santino and Koslov, I'd like to see Justin and Heath leave with the titles.

Team Mysterio vs. Team Del Rio: The only tradition Survivor Series match on the card.  This one is a wild guess.  Not sure what to expect here. I'll go with the baby face team winning.  Maybe Big Show as the sole survivor, setting him up for a run against Kane for the world title.

Kane vs. Edge: Based on my previous prediction, I'm going with Kane on this one.  He's been on a pretty good winning streak on PPV, beating Undertaker three months in a row.  I like Edge, but I'd also like to see Kane finish out 2010 with the world title.  I think a lengthy reign makes the belt seem like it's worth a little more instead of these title changes every three or four months.

Dolph Ziggler vs. Kaval: This one is for the Intercontinental championship.  I like Kaval a lot.  He was my favorite rookie on NXT 2.  But he's been jobbed out constantly on Smackdown!  Was that just him paying his dues and getting the big payoff tomorrow on PPV?  Not sure what to think here.  I'd like to pick him as the winner, but my gut tells me Ziggler wins this one, or at least leaves the building with the IC strap around his waist.

Daniel Bryan vs. Ted DiBiase: Take about rushing a title match with little to no build up.  How much of a build was that for this one?  30 seconds?  And they didn't even announce it on Raw, we heard about it first on WWE.com.  Lame.  They could have had these guys, along with a few others team up and do a traditional elimination match and develop something for the next pay per view.  That being said, I really hope Bryan goes over here.  But I think this has a chance to develop into a nice feud, so I hope that don't just rush through this and move on to the next program for each man.

Randy Orton vs. Wade Barrett: Freed or Fired for John Cena.  My bet, Cena goes with Wade and turns heel, leaving all his pretween fans with tears rolling down their chubby little cheeks.  Wade becomes the champion (I still think it's too soon) and we get a heel Cena vs. a face Randy Orton at Wrestlemania 27.  The powers that be will justify it being something "new."  Of course, I'm not sure they can hold off that long.  We'll see.

So that's it, my thoughts at this moment.  Of course that's likely to change, but I'm going to stick with it.  The other factor I haven't included here is the Miz.  I can't see him cashing in now, especially when he keeps talking about doing it.  But with him no where on the card, I can't see him not making some kind of appearance.
Posted by Kevin Hunsperger at 9:42 PM