I don't watch a whole lot of TNA.  But I am familiar enough with the storylines and most of the guys and gals on the show.  So today, I wanted to have a little fun and list the Top 5 from TNA that I would like to see in the WWE at some point.

These are all guys who have NOT  competed in the WWE.  Of course, I'd like to see Kurt Angle and Mick Foley come back to the E in some capacity one day.   Add Ric Flair, Mr. Anderson, RVD, and Jeff Hardy to that list too.

Disclaimer, none of these photos are mine.  Most likely they're from TNA, via Google image search. 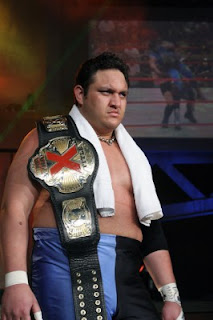 1. Samoa Joe: I've only seen Joe wrestle in person one time.  That was up in Chicago at an ROH show Wrestlemania 22 weekend.  He was part of the war with CZW at the time.  I'm not even sure if he wrestled or just fought Necro Butcher.  I remember sitting shoulder to shoulder in the crowd, when the action spilled out of the ring.

Joe and Butcher were beating the hell out of one another.  They knocked over chairs in the crowd and were throwing punches right in front of us.  We were so close, we probably could have reached out and tag them.

That night, I kept calling Joe "Rikishi 2.0" because I'm a WWE mark and that's how I roll.  Plus I think it annoyed my friend Chad.  Ha.

Honestly, I was impressed with Joe.  I always have been.  He seems like a legit bad ass and moves around the ring pretty well.  But if he did ever move to the E, I wonder how they would change him.  Would they ruin the gimmick or make it better?   The E has a tendency to take things that are popular elsewhere and turn it into something lame.  Joe is still pretty young too, 31.  Plus I found out we share a birthday.  Awesome. 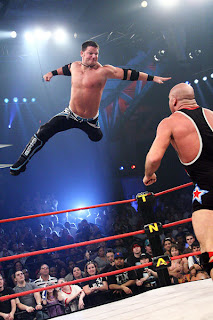 2.  A.J. Styles: Obvious reasons here.  He is one of the best high flyers out there.  And the WWE seems to have a new interest in that breed of wrestler.  Evan Bourne, Kaval, Justin Gabriel join veteran flyers Rey Mysterio and Chavo Guerrero (he counts, right?)

A.J. has proven himself in the ring with multiple TNA title wins.  He's gone at it with some of the best including Kurt Angle and Sting.  And now he's under the wing of Ric Flair.

He's still young too.  Only 32, and could definitely add something to the product.  A.J. could wrestle with the cruiserweights or be a contend for the WWE or World Heavyweight champions.

While doing some research for this post, I discovered A.J. did wrestle on WWF Jakked about a decade ago.  He was also offered a developmental deal, but he turned it down.

I think had he signed it back then (2002) he probably would have ended up lost in the shuffle.  Going to TNA and becoming an established superstar was probably the best thing for A.J.  Hopefully one day we'll see his talents in the E.

3.  Jay Lethal: I'll admit, I don't know a whole lot about Jay Lethal, but I do enjoy his impression of "Macho Man" Randy Savage.  He seems to have the look and the skills to get over the the WWE fan base too.

He has most recently worked with Ric Flair, which can only make the guy better.  Plus, Jay is young.  Only 25, so I'm sure there's chance of seeing him pop up in the E at some point.  If nothing else, maybe to induct Savage into the Hall of Fame one day.  Ha ha. 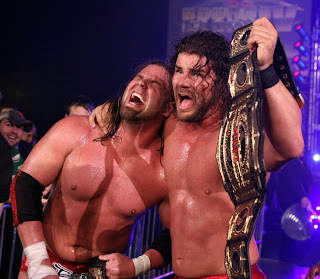 Anyway, I really don't ever expect to see this tandem in the WWE.  That's mostly because of the fact that the E has the reputation now for destroying teams.  Are there any duos there right now that were together at this time last year?  Sure, the Hart Dynasty, but mark my words, they'll be split up before the end of the year.

James Storm and Robert Roode were both members of successful tag teams in TNA.  Then the two were put together.  I think this combo has had more success than America's Most Wanted and Team Canada.  They work well together and have been tag champions three times now.

They're also a part of Immortal and will continue to learn and grow under the likes of Ric Flair and Jeff Jarrett, and I guess even Hulk Hogan. 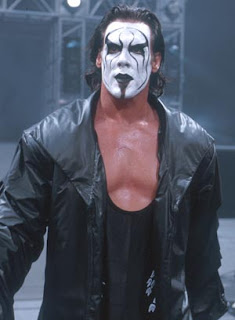 5.  Sting.  Yes Sting.  Watching wrestling in the late 80's and early 90's, I always wanted Sting to go to the WWF.  How awesome would it have been to see him and the Ultimate Warrior together again.  This time as big time superstars.  Again, I was young and markish at the time.

I'm not sure how Sting went all of his career without gracing the WWE with his presence.  We all know Sting has the goods.  Of course time is catching up with him.  Will he ever make it to the E as an active wrestler?

My guess is probably not.  But a guy can dream, can't he?  Of course, I would have liked a Sting-Shawn Michaels match.  Edge would be another good opponent.  Maybe even the Undertaker.  Two of the biggest "franchise" players of all time squaring off.  Of course time has taken it's toll and this match would have been better about 10 years ago.


So there you have it.  My list of TNA wrestlers I'd like to see in the WWE.  I'd say with the exception of Sting, the chances are pretty good we'll see all of these guys jump ship at some point in their careers.

Someone else I'd like to see, who isn't with TNA anymore is Awesome Kong.  I think she'd definitely shake things up in the divas division.  She and Beth Phoenix could have some epic battles.
Posted by Kevin Hunsperger at 1:45 PM