The world seems to be talking about the Royal Wedding.  So I've tweaked a previous post on WWE weddings.  There have been 14 televised nupitals in the history of the WWE.

Goldust & Aksana:
The most recent was Goldust and Aksana on NXT.  Of course, like most wrestling weddings, this one ended badly.  At least for Goldust.  Just as he was about to kiss the bride, Aksana smacked him and walked out with the Million Dollar belt.  Ouch.  I believe they got their nupitals annulled shortly after the ceremony.

Uncle Elmer & Joyce: Love was in the air back in October 1985.  I can't believe it's been more than 25 years now.  I remember watching this on Saturday Night's Main Event.  Elmer and Joyce got hitched in the ring in front of a live audience.  At one point during the nuptials, Joyce got hit by a paper wad or something.  Then "Rowdy" Roddy Piper lived up to his nickname and interrupted the ceremony.  He just insulted the Hillbilly and his soon to be bride.  He never actually got in the ring.  Later at the reception, Jessie Ventura, who had been dissing the whole ceremony read a poem insulting the newlyweds.  He was tripped by Hillbilly Jim and fell into the cake.  No major catastrophes there, unless you count the performance by Tiny Tim.  Just sayin'... 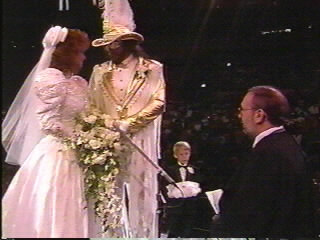 Randy Savage & Elizabeth:  This couple was already hitched in real life, but storyline wise they'd been estranged since the split of the MegaPowers.  When Savage lost a retirement match to the Ultimate Warrior at Wrestlemania 7, and Savage's "gal" Sherri put the boots to him, Elizabeth quickly made the save.  The two then "married" at SummerSlam '91 inside the ring.  As you can see, Savage had a stunning look going on for the ceremony.  Again, no major disturbances during the "I do's".  It was the reception where Jake "the Snake" Roberts struck.  If I remember right, he left a gift wrapped snake there for Elizabeth to find.  Newcomer, Sid Justice made the save there.  Unfortunately for the Macho Man and Liz, they divorced in real life a short time after their wrestling wedding. 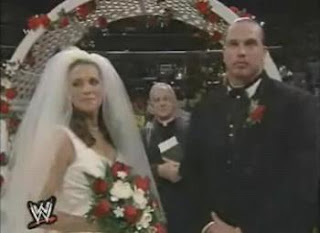 Test & Stephanie McMahon:  This romance started budding during the Attitude Era in mid 1999.  Test had just turned face after living Mr. McMahon's corporation.  Steph fell for him and soon, "Andrew" proposed.  The two were set to get married live on RAW, until Triple H and DX interrupted the ceremony.  It was then revealed that Steph was already married to Hunter.  Apparently, she was drugged or drunk and the two had a quickie marriage in Vegas.  Turns out later Steph and Trips were in on the gag together and the two formed the McMahon-Helmsley era.  The two are married in real life and now have three daughters together. 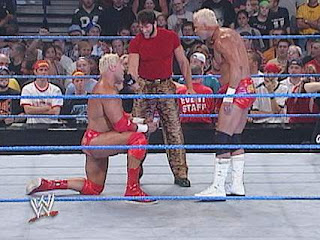 Chuck & Billy: This was a time when the PG rating was out the window.  Chuck Palumbo and Billy Gunn were a newly formed tag team.  At first they didn't seem to mesh well, but soon, they both bleached their hair blond and wore the same attire, and naturally fell in love.  Or so it seemed.  The pair was managed by a guy named Rico who also served as their stylist.  This commitment ceremony drew mainstream media attention.  I remember the couple appearing on the Today show prior to the ceremony.  Right up until the exchanging of the vows it appeared it was going to happen.  Then the two admitted it was all a stunt and blamed Rico for letting things get out of hand.  About that time, the old minister in the ring, removed his mask to be revealed as Eric Bischoff.  His team, 3 Minute Warning (Rosie & Jamal, later Umaga) came out and delivered a beat down.  Stephanie McMahon was somehow involved too and ended up getting hurt in the fray.

I think it's safe to say whenever there's a wrestling wedding planned, chaos will ensue.  Hopefully Kate & William have better luck.
Posted by Kevin Hunsperger at 12:34 PM