Eddie Guerrero has been gone five years now.  Today is the anniversary of his death.  The first time I really remember watching Eddie wrestle was about 15 years ago when he was in ECW.

I was in college at the time and ECW came on late at night on ESPN I think.  I remember channel surfing one night and stopping when I came to the show.  Eddie was wrestling Dean Malenko and the two put on a helluva show.  Those of you who watched ECW back then know what I'm talking about.  The two were so smooth and so good together in the ring.

It wasn't long after that Eddie and Dean and Chris Benoit all got plucked from ECW and went prime time with WCW.  I continued to watch him and his radical buddies climb the ranks of the company.  But it seemed they all hit that glass ceiling and really climbed past the mid card status.

I was excited in 2000 when Eddie and the other Radicals jumped ship and joined the WWF.  I watched with high expectations that the foursome would make a difference.  I think it's fair to say that Eddie and Chris did.  They took different paths, but both climbed the ladder of success.

Some of Eddie's more memorable moments in the WWE for me were his "love affair" with Chyna.  It's where we learned all about "Latino Heat!"  I can still hear him calling Chyna his mamachita and begging for her forgiveness after cheating in a match with her.  And who could forget that infamous shower scene with the Godfather's hos.  That ended the relationship with Chyna (whom Eddie was engaged to)

Eddie's tag team run with his nephew Chavo was awesome too.  The matches Los Guerreros (who adopted a "we lie, we cheat, we steal" attitude) had some great matches with Kurt Angle & Chris Benoit and Edge & Rey Mysterio.  All six men involved in that feud worked their asses off in the ring.  It was a great time in the tag team division.

Another memorable angle for Eddie was the one against Rey Mysterio in which Eddie claimed to be Rey's son Dominic's Papi.  The marketing campaign that went along with that was classic with fans showing up to arenas wearing "I'm Your Papi" t shirts.  The two had some great matches, including their battle at Wrestlemania 21.  Sadly, it would be Eddie's last Mania.

My favorite time for Eddie was when he won the WWE title from Brock Lesnar.  It was such an amazing moment.  A true David vs. Goliath.  It was a big win for the "little" guy.  A man who was held back and disrespected (in my opinion) during his days in WCW.  (remember the Latino World Order or the Filthy Animals?)  Eddie's win was great, but unfortunately it was the beginning of the end of his life. 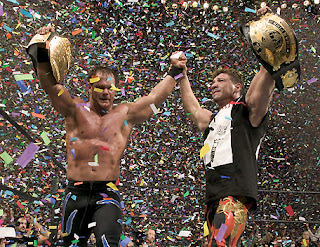 His title defense against Kurt Angle at Wrestlemania 20 had one of the most memorable finishes of the night.  Eddie had untied his boot and when Kurt locked in the ankle lock submission he slipped out of his boot and surprised Kurt with a roll up.

But probably even more memorable was the moment later in the evening.  Chris had just won the World Championship.  Eddie of course had successfully defended the WWE championship and the two embraced and posed together in the ring.

It's hard to believe that less than 3 years later both men would be gone.

Eddie's life ended way too soon.  I think he was on the verge of another run with the WWE title.  How great would that have been?  Rightfully so, Eddie was inducted into the WWE Hall of Fame the following spring during Wrestlemania weekend.  His friends remembered him fondly as they inducted him and his wife, Vicki and two young daughters accepted the induction on Eddie's behalf.

That's now Eddie's legacy.  I was happy to read that his oldest daughter, Shaul, has signed a developmental deal with the WWE.  I hope that she is treated with more respect than Eddie's widow has been.  I also wish her nothing but success as she follows in her famous familia's footsteps.

God bless you Eddie, rest in peace.
Posted by Kevin Hunsperger at 8:03 AM