Will there be a hoedown after this showdown? 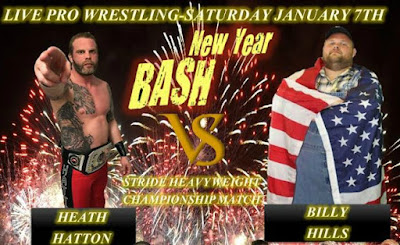 Stride Pro Wrestling returns this Saturday night, January 7 with several great matches. The Stride Pro Wrestling Heavyweight Champion Heath Hatton steps into the ring against "Farmer" Billy Hills. Both men are two of the most popular wrestlers in Stride so this contest will be very interesting, to say the least.


Hatton won the title in November and had a successful defense against "Big" Roger Matheus, Joey O'Riley and former champ Ax Allwardt in December. Hatton's record speaks for itself. He's had some great matches against all comers from former NWA World Champion Adam Pearce to Daniel Eads to a shot on WWE Extreme Rules against Ryback.


But don't underestimate the man from Mudlick, Kentucky. Farmer is one of the toughest competitors I've seen in indy wrestling. He's battled the likes of Allwardt, Tony Flood and "The Hitman" Jake Capone. Farmer hasn't tasted gold yet in Stride, but he's come close, making it to the semi-finals of the Legacy Championship tournament. Farmer is very deserving of the opportunity he's receiving. He will not take this moment lightly and will be ready to go against Hatton. But as you might expect, Hatton has the heart of a champion and shouldn't be taken lightly by any opponent.

Once the dust settles will Farmer being celebrating the showdown against Hatton with a hoedown? Find out Saturday night. Bell time is at 6:30 at the CMA Dojo at the Illinois Star Centre Mall in Marion.
Posted by Kevin Hunsperger at 6:11 PM