The Rock He Is 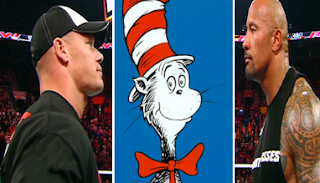 Since it's Doctor Seuss's birthday, I decided to get a little creative and have fun.  I hope you enjoy this.  I'll be writing and doing a more in depth vlog on Cena vs. Rock in the coming weeks.

He is the Rock.
The Rock he is.
The Rock is main eventing Wrestlemania, not the Miz.

Some stars are sad, others are bitter.
But the Rock says he's back and he isn't a quitter.

He hates John Cena, says he has lady parts.
Plans on putting boot to ass when the match starts.
The contest will be big, one of the biggest of all time.
But if the Rock wins, it'll be a huge crime.

Cena should win, the reasons are good.
John will be on Raw the next day, and the Rock in Hollywood.
So manginas, Fruity Pebbles, and jean shorts a side,
Cena will rise above hate and not go and hide.

Thanks for reading and don't forget to like us on Facebook.
Posted by Kevin Hunsperger at 5:46 PM