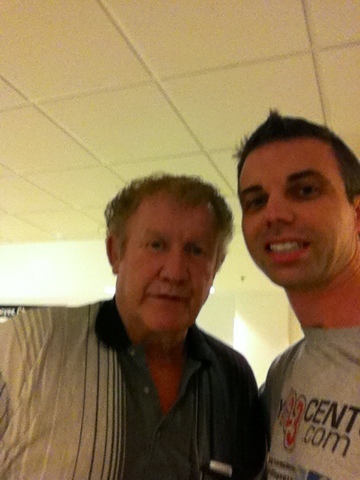 One of the cool things about Wrestlemania weekend is all the random wrestling related sightings you experience. Yes, I'm putting my mark side on full display for this post. No matter how many wrestlers I meet, it's still something I like to brag about, especially when the encounters happen away from a wrestling show.

When I arrived in Miami Friday afternoon I fully expected to see a wrestler or two getting their luggage. Last year Travis and I ran into Mean Gene in Atlanta, and earlier this week Chad saw Michael Hayes at the airport. So when I got off the plane and made my way to baggage claim there was a driver standing there with a sign that said Bautista. Seeing as that's how Batista's name is really spelled, I suspected he'd be showing up soon. In the mean time Randy Orton came strolling by and the fans flocked around him. I kept my distance as he told them he was there to get his wife and daughter. Turns out they were on my flight from St. Louis.

Batista finally showed up with his hair cut in a Mohawk. A fan asked for a pic and he said wait until he got his stuff. Then he walked away and chatted with the Ortons. While I was waiting Harley Race arrived with his wife. He got up from his wheelchair and made his way to the luggage carrousel. Fans approached him too and the legend took time to pose for pics and sign autographs. I took the opportuntity to get a quick photo and shake his hand. I thanked him for his time and he seemed very happy to be there and meeting fans. I appreciate him taking the time to acknowledge us.

Friday night I got a chance to talk with Colt Cabana for a quick second. He worked an AAPW show back in January (Main Event is still available on DVD) and he said he remembered me. He seemed to anyway. Saturday afternoon we saw Skip Sheffield at Chilis. Chad is a big fan, but didn't want to interrupt his meal. Who knows who else we'll meet this weekend. WrestleReunion is Sunday and we've got VIP tickets. Stay tuned.
Posted by Kevin Hunsperger at 3:13 PM