Mania Memories: Should Have Been a Dream 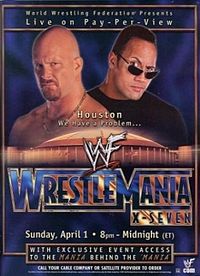 Wrestlemania 17 could have been the greatest wrestling card of all time.  Think that's an exaggeration?  I don't.  It was weeks after Vince McMahon showed up on WCW Monday Nitro via satellite to announce that he had purchased the company.  The possibilities for Wrestlemania COULD have been endless.  The whole invasion could have played out so much differently...but there were other factors involved here. Part of it could be blamed on not all the WCW stars signing with WWE and instead sticking with their contract from WCW/Time Warner.  The other problem in my opinion was Vince's own ego.  This was the one time he should have thrown money at all the top guys and built a dream card.

Instead of getting big matches like the Rock vs. Sting or Stone Cold Steve Austin against Hulk Hogan, we got the Rock & Austin: Part 2. This was also the match where Austin turned heel at the end and won the world title back. I wasn't overly impressed with that, and I've mentioned before I don't like repeat matches at Mania.

X-seven as they wrote it, also featured a street fight between Vince and Shane McMahon. The match wasn't bad nor was the buildup, but again instead of focusing on the new wrestlers coming in, the focus was back on the McMahon family dysfunction.

The Undertaker and Triple H met in their first of 3 Wrestlemanias. Taker of course won that one. Chris Jericho and William Regal wrestled for the Intercontinental title, Eddie Guerrero won the European title from Test, and Edge and Christian reigned supreme in a TLC match against the Dudleys and Hardys.

Kane won the hardcore title in a match against Big Show and Raven. Chyna beat Ivory, Kurt Angle beat Chris Benoit, and the APA & Tazz got the best of Right to Censor. There was also a gimmick battle royal on the card, which I'll admit I loved simply because I'm a fool for old school.  While some of these matches were great, I still think adding big names from WCW to the event would have been historic.

Unfortunately either Vince wouldn't pay or the big name guys would sign at the time. Hogan, Ric Flair, Goldberg, Scoot Hall, Kevin Nash, and Scott Steiner all eventually ended up with the WWF. Too bad it didn't happen for this event, not to mention bringing in Sting and Randy Savage too.  I know by 2001 many of these guys were past their prime, but heck, it still would have been great to see them all on the same card, wouldn't it?

What are your thoughts?  Was X-Seven the best of the best, or would an invasion angle worked better that night?  Post here or on Facebook.http://www.facebook.com/my123cents
Posted by Kevin Hunsperger at 7:02 PM