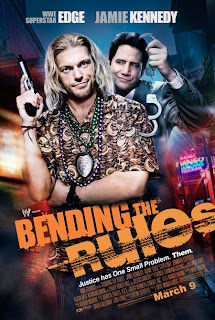 This weekend saw the limited release of the latest WWE Studios film, Bending the Rules. This is the 13th WWE film. I’ve only seen three WWE films all the way through. In my opinion, Knucklehead was a decent comedy while Legendary and That’s What I Am are good dramas that shouldn’t be overlooked. On the flip side, The Chaperone, Inside Out and The Reunion are three films I couldn’t even finish watching. Since Bending the Rules was playing at a theater within walking distance of my apartment, I figured why not go and check it out.

As soon I as purchased my ticket, I had my doubts about the show. This was the first movie I’d seen at a non-AMC theater after noon in I don’t know how long. I wasn’t expecting a ticket price of $13.25. Then I walked into the smallest, most narrow theater I’ve ever seen. After finding my seat, the other three people in the theater and I settled in to see if a movie starring Edge and Jamie Kennedy could exceed expectations.

Where do I start with the review? Edge plays a cop who’s on trial for some shady dealings. I don’t remember what he did exactly. I think it was mentioned in a throwaway sentence towards the end of the film. Jamie Kennedy plays the Prosecutor trying to put Edge behind bars.

On his way into court, Edge arrests a low level informant Gil, (Alias’ Kevin Weisman) who is on his way to deliver a coded message to an unknown entity. After dropping Gil off at the jail, and taking the message from Gil, Edge walks into court for his trial and runs into Jamie Kennedy’s mom, played by Arrested Development’s Jessica Walter, who is a former actress and star of Edge’s favorite movie. After the court case is thrown out due to a deadlocked jury, Jessica’s character hires Edge to trail her husband, Philip Baker Hall, to find out if he’s cheating on her. Before he starts on the case, Edge goes to check on Gil and finds out he isn’t in jail and there’s no record of Gil being booked.

Meanwhile Jamie Kennedy’s character finds out his wife is leaving him and his prized 1955 Studebaker Hawk is stolen. Due to trying to put Edge behind bars, the cops are less than eager to help Jamie in his hunt to find the car. In the meantime Edge figured out the coded message is license plates numbers for four different cars, one of which is Jamie’s Hawk. That plot point is what leads to Edge and Jamie becoming reluctant partners as they try and hunt down the person who is killing the other owners of cars on the list while also trying to find Jamie’s car.

I’m not going to bother with the rest of the story because it’s one of the most clichéd and generic stories. The ending comes about after a minor character who’s seen in two previous scenes is found to be the one behind the murder for a reason that while somewhat logical, is presented in a manor that feels like the writer didn’t have a solid reason for the events to happen and just pulled something out of the air. The reveal of the stolen car is even more confusing. It turns out Philip Baker Hall took the car and was parking it in hotel parking lots to keep it safe. Parking it in an open parking lot was safer than keeping in Jamie’s garage apparently. Because he was parking in hotel lots, he was racking up hotel receipts, which is why Jessica thought he was having an affair.

Not only is the story clichéd, the characters are stock characters from any low budget cop movie from the ‘80s, all the way down to the black police chief who’s tired of Edge’s crap. Even if the story wasn’t disjointed and a mess, the directing and editing of the film are barely a step above a TV movie. That’s not surprising since director Artie Mandelberg only has one non-TV directing credit, the WWE film Inside Out. All of the scenes feel like they shot all of Jamie’s lines, switched and shot all of Edge’s lines then spliced them together in the editing room. The result is all the conversations sound like two conversations pieced together from people who weren’t talking to each other.

I thought Jamie Kennedy was entertaining in the Scream films, and am probably one of the few people to enjoy Kicking It Old School. Most wrestling fans would describe Edge as a charismatic and entertaining personality. In Bending the Rules however, both guys come off as lifeless characters trying to remember their next line. I don’t know if the shooting schedule was so short there wasn’t time to ensure a good take was filmed, or if the director doesn’t know how to get a good performance from actors. Whatever the case, the acting in the film was a lot worse than I anticipated.

Bending the Rules will not get a wider national release, so I don’t have to tell you to go see something else if you’re at the theater trying to find something to watch. I’d expect the film to pop up on Netflix in the next couple of months. I guess if you have 90 minutes to kill, there are worse films to watch. However I would recommend a viewing of The Apple, or Standing Ovation unless you’ve seen every other WWE Film and want to keep the streak going.

Vince McMahon recently made comments that WWE Studios could cease operations should the next batch of films not make money. Before they shut the doors, I would like to see them take CM Punk’s idea and make a Cannonball Run style film with the WWE roster.

Have you seen any WWE films? Do you have an idea for a future film? Share your ideas on our Facebook page.
Posted by Kevin Hunsperger at 1:40 PM