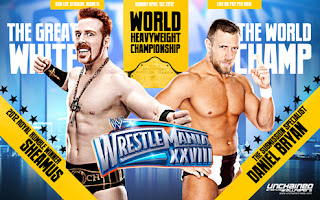 The last installment in the delayed look at the Wrestlemania records of the participants in the top four matches is an interesting look. Not counting their match last year for the United States title, which was bumped off the pay per view, the World title match between Daniel Bryan and Sheamus will make history as being the world title match who’s participants have the least Wrestlemania experience.

By walking into Wrestlemania as Champion, Daniel Bryan joins Sgt. Slaughter and Ric Flair as the only wrestlers to make their Wrestlemania debuts as World Champions. Yokozuna is the only other wrestler to make a Wrestlemania debut in a world title match. I guess technically Lex Luger also made his in-ring debut at Wrestlemania X in a title match, but he had been introduced the previous year when he debuted as The Narcissist.

While the build up to their title match hasn’t exactly been outstanding, given they are fourth on the pecking order and could slip to fifth if the “Battle of the General Managers” continues to pick up steam, it’s understandable the match hasn’t had more of a storytelling element attached to it. As long as they make it onto the actual pay per view and don’t get bumped again to the pre-show dark match, I don’t think Bryan or Sheamus will care how unimportant the build up was to their match and will still go out and deliver what could be the sleeper hit of the night.

With all the major matches taken care of, we can move on to other aspects of Wrestlemania over the next 12 days. Be sure to follow us on Facebook, Twitter and YouTube. Don’t forget that on March 29, Kevin and I, along with our friends from AAPW will be making our radio debut with “From the Rafters.” More information will be posted the closer we get to air.
Posted by Kevin Hunsperger at 1:15 PM