Larry Matysik: The voice of my childhood 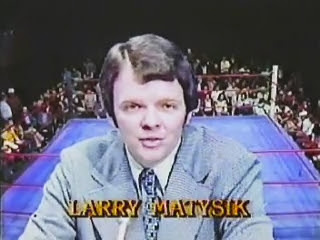 Some people will tell you Jim Ross was the voice of their youth when it came to pro wrestling. Others will choose Tony Schivanie. Gorilla Monsoon, Vince McMahon, Jesse Ventura, Gordon Solie, Bob Caudill, Bill Mercer and Lance Russell all rank up there in my childhood too. However, one of the first and most memorable voices for me is that of Larry Matysik.

I grew up just outside St. Louis, Missouri. When I was in grade school my dad, brother and uncle religiously watched Wrestling at the Chase and World Class Championship Wrestling. At the time, I had no interest in it, however, I would hear the action being called. Early on I remember the sound of Larry Matysik's voice as he called the action between the likes of Dick the Bruiser, Gene Kiniski and Bruiser Brody.

Once my fandom exploded in early 1983, Wrestling at the Chase became a staple each Sunday morning in our house. Sadly I got hooked a little too late as the show ended its decades' long run on KPLR later that year. 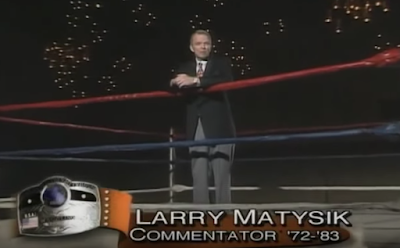 But what a year it was for me. I don't remember specific matches from that era, but I do remember hearing Larry call matches. To me, he is Wrestling at the Chase. I remember ring announcer Mickey Garagiola very well too. My uncle knew Mickey's kids from school so it always felt like we were watching good friends do their thing on TV.

It wasn't until 2017 that I got to meet Larry Matysik. I traveled to a Southern Illinois Championship Wrestling show with my friend Heath Hatton. Larry is very active with SICW and promoter Herb Simmons. I enjoyed chatting briefly with someone who meant so much to me as a child and an influence on my passion for becoming a wrestling commentator and announcer.

I understand Larry has had some medical setbacks recently. I wanted to take a few minutes to share thoughts and memories on someone who molded a generation of professional wrestlers and its fans. Larry, thanks for the memories.