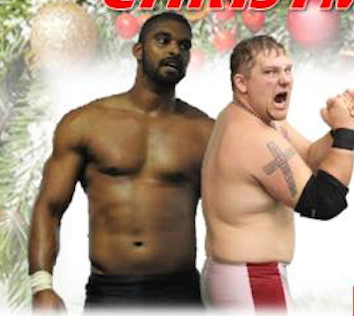 What a difference a year makes. It was this time last year that Tony Flood was preparing to defend his Legacy Title against Chris Hargas. Flood lost the belt and Hargas celebrated two hard-fought, back to back victories. However this year the two are allies as Hargas has turned his back on the fans of Stride Pro Wrestling and aligned with J. Wellington Beauregard. 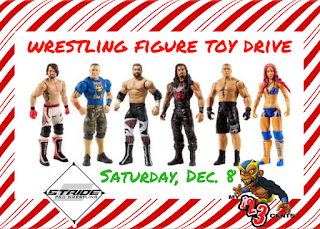 Hargas and Flood have found common enemies in Heavyweight Champion Heath Hatton and his partner Ax Allwardt. The four will go toe to toe at next week's Christmas Break show (Dec. 8). The new Stride Arena at 1130 N. Division Street in Carterville plays host to the event. (By the way, bring a new, unwrapped wrestling action figure for Toys for Tots too).

Flood has been pretty ruthless his entire tenure in Stride. He's used underhanded tactics to get what he wants, including a well-hidden lead pipe that earned him the Heavyweight Title too. He deceived Jerry Travelstead and Stride fans with an alter-ego, El Fabuloso. He's been a four-time champion here and has done whatever it takes to win and retain those championships. 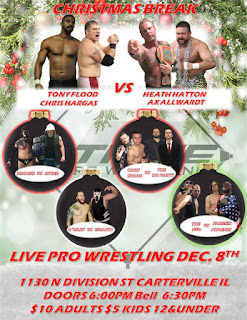 Hargas, as I mentioned, was loved by fans. His recent attack on Allwardt with a chain is inexcusable. He's battled Hatton for the title too and that's when Flood once again got involved. No doubt Santa has been making his list and Flood and Hargas are on top of the naughty side. Gentlemen, I'd say you have some coal in your future.

Posted by Kevin Hunsperger at 7:06 AM